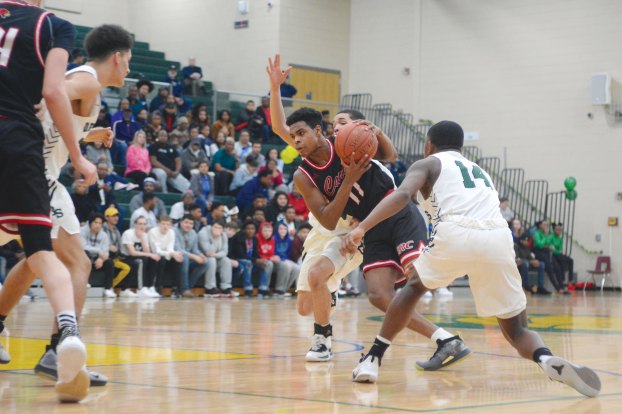 Jerone Morton fights through a double-team in Thursday night’s win at Bryan Station. Morton finished with a team-hgh 20 oionts to help lift the Cardinals to a 74-63 win over the Defenders. (Photo by Roman West)

Bush was a key player for the Cardinals in their 74-63 win over the Defenders, coming out on fire to start the game. Bush picked up 10 of his 16 points in the first quarter.

While looking to post a big game against his former school might have crossed Bush’s mind at some point, GRC head coach Josh Cook said it didn’t come up while preparing for the game.

“It wasn’t really [something that came up]. We just wanted our guys to play, adjust and keep their composure and focus,” Cook said. “It’s not perfect, but we’re getting better. I can honestly say that tonight was a really big step for us.”

While Bush and the Cards came out hot, they weren’t able to extend their lead past two possessions in the first half. GRC would go up six points, then Bryan Station would answer back with a 3-pointer to kill any momentum the Cards could get.

After a 6-2 run from the Defenders to end the first quarter, GRC entered the second period with a 19-17 lead. The trend continued into the second quarter. Bryan Station would hit 3-pointers to stop Clark County runs, but GRC didn’t surrender the lead until a layup right before the buzzer from the Defenders to put them on top 37-35 entering halftime.

The Cards were finally able to break through and extend their lead in the third quarter. GRC’s defense was stout throughout the quarter, only allowing 10 points while only committing two fouls.

“We were doing a good job protecting the drive. We also rebounded and took care of the basketball,” Cook said. “When we take care of it and we get points on the board, it helps stops transition. We did some good things tonight.”

The third quarter saw GRC outscore the Defenders 22-10, putting them in the driver’s seat for the remainder of the game as they entered the final period up 57-47.

GRC’s lead would remain near double digits for most of the fourth quarter, never getting closer than eight points, as they went on to win 74-63 to spoil Bryan Station’s Senior Night.

GRC is back in action tonight as they host Boyd County in the regular-season finale. The game is scheduled to tip at 8 p.m. at the new GRC Arena.