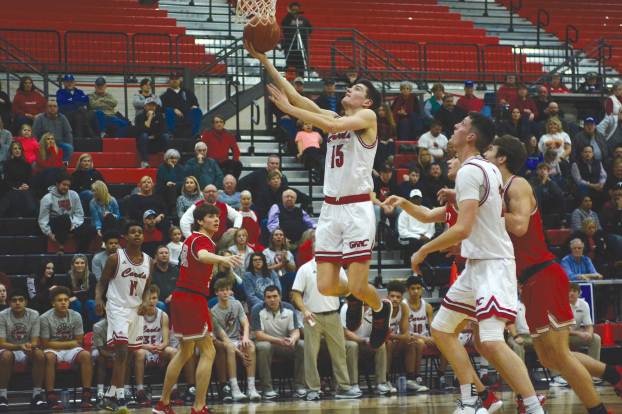 Jared Wellman led the Cards to their fifth-straight win as he scored a team-high 16 points. (Photo by Roman West)

George Rogers Clark’s boys basketball team took to the floor Friday night in their regular-season finale, beating Boyd County 71-53 to cap off a five-game winning streak as they head into the postseason.

The Cardinals’ four All-Region selections, Lincoln Bush, Jerone Morton, KJ Rucker and Jared Wellman, all scored in double figures and combined for 54 points, one more than the Lions.

Jared Wellman led the way for GRC, knocking down two 3-point shots on his way to a team-high 16 points.

Wellman’s first triple was the final points of the Cardinals’ 12-0 run to begin the game. GRC held Boyd County scoreless for the majority of the first quarter as they jumped out to a 16-5 lead during the game’s first eight minutes. But all was not perfect for the Cards, as they had three starters collect two fouls in the game’s opening period.

Clark County scored the first four points of the second quarter before the Lions came roaring back. They scored eight unanswered points and 17 of the final 27 points in the second quarter to head into the locker rooms trailing 27-22.

The third quarter looked a lot like the first quarter for GRC. After a Boyd County 3-pointer to open the half cut the Cardinals’ lead to two points, GRC went on a 10-point run to push their lead back to 12. GRC would outscore the Lions 19-11 in the third quarter to enter the final period up 46-33.

Clark County continued to roll throughout the beginning of the fourth quarter, pushing their lead to as many as 20 points. However, Boyd County wouldn’t go away. The Lions closed the gap to as few as 11 points with three minutes to play, but GRC would only allow one more basket and closed the game out strong offensively to end the regular season with a 71-53 victory.

“In the third quarter we got our mentality fixed and got back in the driver’s seat,” Cook said. “It was good to see our guys close out the regular season on a solid note.”

The Cards will be back in action Tuesday night as they host the first round of the district tournament. GRC will take on Paris, a team they swept in the regular season, at 6 p.m. Tuesday night.

“Paris is playing much better. They’re playing really good basketball right now,” Cook said. “I love tournament time. It’s a lot of fun. It’s what it’s all about. When you live in the state of Kentucky, you’ve got to be ready to play come tournament time. I’m excited for our guys. I might get a little intense, but this is my passion and this is what I dream about. I want our guys to enjoy this experience and give themselves a chance to do something special.”