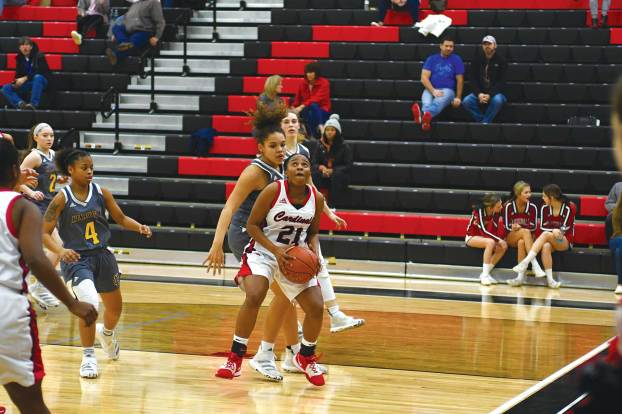 The George Rogers Clark Lady Cardinals closed out their regular season Thursday night with a 38—point win over the Henry Clay Blue Devils.

The Lady Cards opened up the game by scoring the first 17 points of the contest and never looked back from their large lead.

GRC was led in scoring by its two seniors Kennedy Igo and Shelbi Wilson. Wilson finished the game with 15 and Igo finished with 11, enough between the two to outscore the Blue Devils for the entire game.

Wilson was also the Lady Cards’ leader in shooting percentage in a night when they were hot from the field, making seven of her eight field goal attempts, good enough for 87.5 percent.

Not only were the Lady Cardinals efficient from the field, but they were also nearly automatic from the free-throw line. Clark County shot 9—of—11 from the charity stripe, one of its best marks of the season.

Another key to success for the Lady Cardinals was their rebounding. The team hauled in 29 boards and were led by Tyra Flowers, who picked up 10 on her own. Flowers has been great on the glass as of late for the Cardinals, picking up double-digit rebounds in four of the Cardinals’ final five games.

The Lady Cardinals will be back in action Monday night as they host Montgomery County in the first round of the district tournament. The game is scheduled to tip at 6 p.m. Monday night.