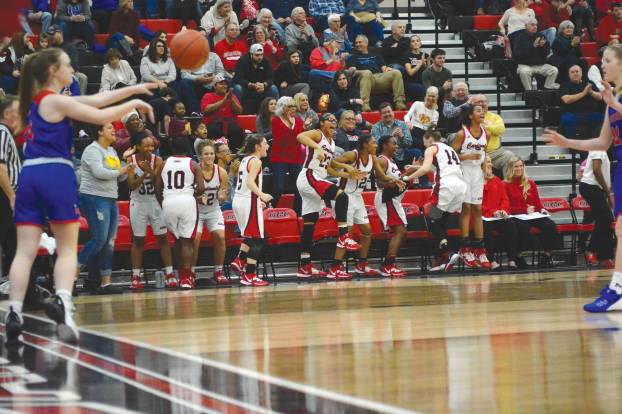 The Lady Cardinals celebrate from the bench as they watch their teammate close out a 50-point win over Montgomery County to advance to the 40th District Championship game Wednesday night. The win also secured the Cards a spot in the 10th Region Tournament next week. (Photo by Roman West)

The George Rogers Clark Lady Cardinals basketball team kicked off the postseason with a 78-28 win over rival Montgomery County.

The Lady Cards, hosts of the 40th District Tournament, were led by senior guard and 10th Region Player of the Year Kennedy Igo. Igo finished the game with 26 points, five assists and four steals in 22 minutes of action. She made 10 of her 14 field goal attempts, including 6-of-9 from behind the arc. 20 of Igo’s points came in the first half.

“Her play goes up a notch in the postseason. We were just talking about how she hadn’t had that ‘wow’ game yet,” GRC head coach Robbie Graham said. “This is her time of the year. She gets amped up, she’s ready to go. She’s feeling good, which is the biggest thing. Her body feels good. Her ankles and everything are feeling good. We’re excited about going forward.”

Igo helped lead the charge out of the gate for GRC as the Lady Cardinals scored the first 11 points of the contest. Montgomery County then got two baskets to fall before the Cards closed the quarter on a 12-point run to take a 27-4 lead into the second quarter.

The Lady Cardinals backed up what their head coach wanted them to do by forcing 20 turnovers in the first half.

The turnovers combined with the Cards shooting 52.5 percent from the field and 41.7 percent from three helped GRC extend the 12-point run at the end of the first quarter into a 22-point run to begin the second.

To close the half, Igo knocked in three 3-pointers to put the Cards up 48-51 at the break.

Tyra Flowers made the Cards’ first basket in the second half, forcing a running clock for the remainder of the game.

The Lady Cardinals went on to outscore Montgomery County 30-13 in the second half to advance to the championship game and secure a spot in the region tournament next week.

“This first one’s tough. I don’t care who you play. There’s a lot of nerves because you never know,” Graham said. “Then you get this one out of the way and you’re kind of playing with house money on Wednesday because you’re definitely playing next week.”

The Lady Cardinals’ championship game will be held at 7 p.m. Wednesday night at GRC Arena.