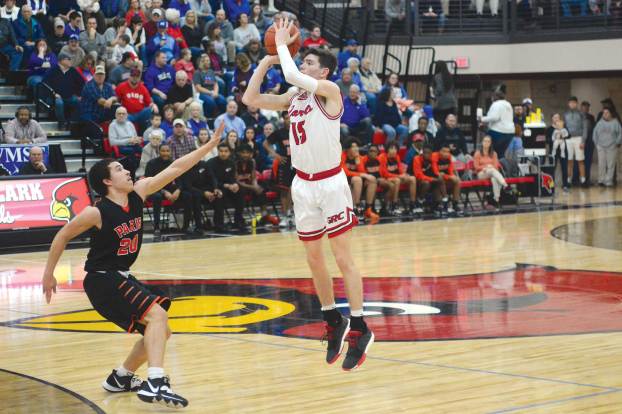 Jared Wellman scored a game-high 20 points and knocked down four of his nine 3-point attempts in the Cardinals’ 62-49 win over Paris in the first round of the district tournament. (Photo by Roman West)

At this point in the season, nothing comes easy.

The Cardinals swept the Greyhounds in the season series, beating them by 31 points at home and 18 points on the road, but the postseason matchup was in single digits for most of the game.

“I knew it would be close, Paris has really improved,” GRC head coach Josh Cook said. “Teams are really going to compete and want to play in these situations. Our guys stuck it out. Our bench stepped up in moments we needed them. We hung in there, kept trying to make plays and found a way to get a win.

GRC’s Jared Wellman and Lincoln Bush helped lead the Cardinals to the victory. Wellman scored 20 points and made four of his nine 3-point attempts. Bush picked up 17 points and 17 rebounds, nearly outrebounding the entire Paris team, which finished with 21 rebounds.

The Cards jumped out to a 4-0 lead to begin the game, but Paris fought back to lead 17-15 by the end of the quarter.

After trailing 23-22 in the second quarter, a 7-0 run from GRC gave the Cards a lead they wouldn’t look back from for the remainder of the game.

By halftime, GRC was up 34-27, but the Cards were shooting 41.9 percent from the field compared to the Greyhounds’ 61.1 percent.

To begin the second half, Paris scored five points to cut its deficit to two, but GRC refused to relinquish their lead. A Wellman 3-pointer pushed the Cards lead back to five points. The Cards were able to extend their lead by one more point by the end of the quarter, entering the final period up 45-39.

Wellman caught fire to start the fourth quarter, going on a 7-0 run by himself to push the GRC lead to double digits for the first time. Then Bush sealed the game for the Cardinals, scoring 10 of his 17 points in the final five minutes to lift GRC to a 62-49 victory.

“Lincoln’s a huge focal point, just like any of them,” Cook said. “Part of his job is to help control the glass, and it’s a tough job because sometimes there’s a lot of contact on him. He’s got to just keep hanging in there and using his head. When he does that, he’s really good.”

The win gives GRC a spot in the district championship Thursday night at 7 p.m. in the new GRC Arena. The win also secures the Cards a birth in the next week’s 10th Region Tournament.