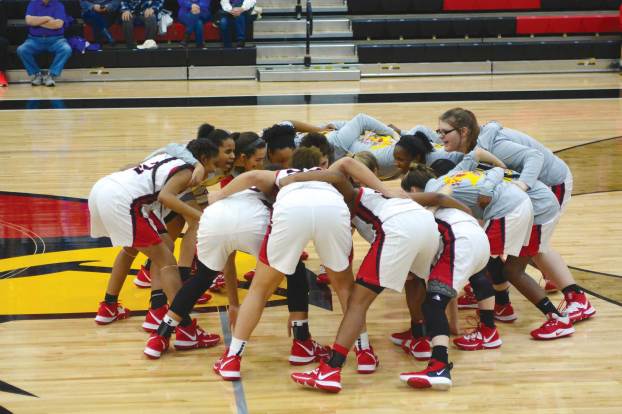 The Lady Cardinals huddled together just before the start of their 78-28 win over Montgomery County Monday night. (Photo by Roman West)

The George Rogers Clark Lady Cardinals basketball team has advanced to the district championship game every season during head coach Robbie Graham’s eight-year run at GRC. After falling to Montgomery County in his first season in the title game, Graham’s teams have won seven district championships in a row.

The 2020 Lady Cardinals basketball team is in the same position as many of its predecessors: a game against Bourbon County with the district title on the line. Out of the seven district championships Graham has won, four of them came against the Lady Colonels. Last season, Clark County defeated Bourbon County 64-38 for the district crown.

The Lady Colonels haven’t had as much luck in district tournaments. They are yet to win a district championship since being realigned to the 40th District in the 2005-06 season.

The Cardinals leading returner scorer from last year’s title match is freshman Brianna Byars. Byars had a hot start to this year’s district tournament with a 15-point performance in the opening round against Montgomery County. Byars also led the team in rebounds (5) and tied the team-high in steals (4).

Byars will likely line up alongside another freshman big in Jhaven Meade. Meade picked up 11 points and 10 rebounds in the Lady Colonels’ win against Paris in the first round. However, Meade struggled in the two regular-season matchups with the Cardinals, shooting a combined 2-of-8 in the games.

The backcourt battle will be between Bourbon County’s Hannah Hamelback and GRC’s Kennedy Igo.

Hamelback also posted double-digit rebounds in the Colonels’ first-round matchup, pulling down 10 boards while scoring seven points. Hamelback picked up a 14-point, 10-rebound double-double in the first matchup between the schools this season.

Igo played what could have possibly been her best game of the season in the Cards’ first-round game against Montgomery County, picking up 26 points on 10-of-14 shooting, including 6-of-9 from 3-point territory. Igo also got the rest of her team involved, dropping five dimes while committing no turnovers. In the two regular-season matchups, Igo led the Lady Cards in scoring each time, scoring 13 in the first game and 17 in the second.

While it is postseason basketball, the loser of this game’s season will not be over. By winning their first-round games, both teams secured spots in the region tournament to be held next week.

The game is scheduled to tip at 7 p.m. Wednesday night at GRC Arena.