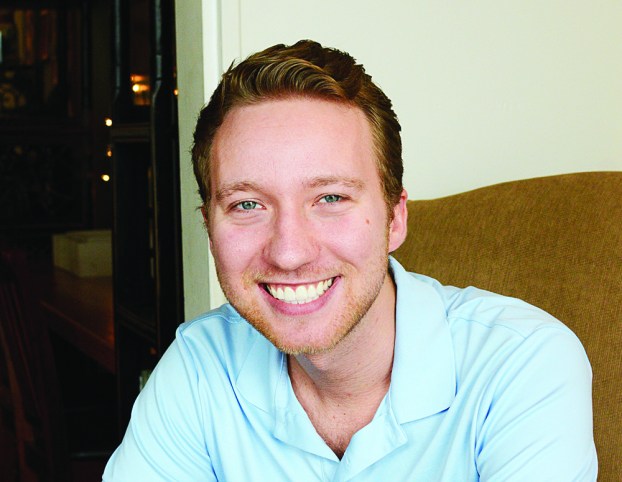 Brack Duncan, at the Cairn Coffee House Tuesday. In October, he will be leaving the United States to begin a year-long Christian mission, The World Race, that will take him to many countries, including Peru, Indonesia and Vietnam. (Photo by Randy Patrick)

This time, he’s going to travel the planet to do it.

Duncan, 23, of Winchester, is the founder and executive director of Buddies of the Bluegrass Inc., a nonprofit that partners with student groups to help fund special needs adoptions for Kentucky families.

Since he graduated from George Rogers Clark High School and started working for STRIDE in Winchester, he has worked with and for people with developmental disabilities.

At the University of Kentucky, his friendship with his fraternity brother Josh, who has Down Syndrome, inspired him to start Buddies of the Bluegrass.

He also works for Bluegrass Community and Technical College as a project manager for a program for people with special needs, and is a photographer and owner of The Lexington Lens. Until January, he still worked for STRIDE, so he had four jobs.

Now his faith has led him to do something entirely different.

Duncan has accepted an invitation to take part in The World Race, a year-long Christian mission challenge to work to improve the lives of others and change the lives of those who participate in it.

In October, he will leave home and not return until his 25th birthday in September 2021. Each month, he will travel to a new country — from Costa Rica to Cambodia — to work with other young volunteers, fighting sex trafficking, nursing special needs orphans, teaching English and doing many other things to help those Jesus called “the least of these.”

He said it’s a hard decision to leave the work that has been his passion, but he feels it’s what he is being called to do.

Duncan has to raise $17,700 to pay for the mission, so after Christmas, he moved back home to save money on rent, will be deferring his student loans and will do odd jobs.

He has been on short-term mission trips before, from helping the homeless in New York to doing flood relief in Texas to helping the poor in Haiti, because he has a heart for missions.

Duncan recalls that in October 2017, shortly after he was crowned “Mr. UK” at his university, the author of a Kentucky Kernel article about him quoted him as saying: “I want to change the world — but it will start here.”

Since then, he said, he has strived for his actions to match his words.

In May 2018, a month after he started Buddies of the Bluegrass, be began considering The World Race. He talked with people who had completed it and wondered if he had what it took to do what they did — whether he could take the “leap of faith” necessary to “leave what God has given me” in the work he does in Kentucky to focus on what is most important to him — his relationship with Christ and helping others, he said in a Facebook post.

But he felt Buddies of the Bluegrass was in good hands and could run without him. His parents, twin brother and two of his younger sisters are on the board and help him run it along with a couple of other people, and they have a “good candidate” to fill his position while he’s gone.

He wrestled with the decision for a year, he said, and finally applied last August. Because he did not hear anything as soon as he had expected, he started another job.

Then he received a call informing him he had been accepted to The World Race, and he agreed to go.

“Now it’s time for me to continue my story somewhere else, but that doesn’t mean I won’t come back,” he wrote in his Facebook post. “I’m not sure what I’ll be doing after I finish, but God has never failed me yet.”

In an interview Tuesday at the Cairn Coffee House, Duncan said he was excited about his upcoming adventure.

“It’s not the usual decision to leave your job, a good job, and your community behind. I’ll be back in 11 months, but that’s a year where I’ll be changing and growing,” he said.

“It’s just something I feel called to do, and at this point, I’m all in. I’m doing it,” he said, flashing a smile.

Those who want to follow Duncan’s mission and support him may visit brackduncan.theworldrace.org.

A Clark County man has been charged for the second time with abuse for the filthy living conditions in his... read more