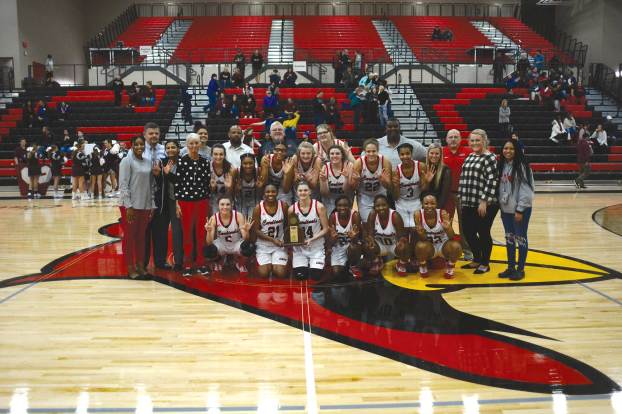 “It feels really good. I don’t value one over seven, because each year a different group of girls get to celebrate,” Robbie Graham, head coach of all seven district championship teams, said. “Some get to repeat it, some get to climb the ladder for the first time. That’s a feeling we want to continue. We’ve had great kids. We’ve had great coaches that have made this possible. This has been a joy to coach some great kids. Coach Brown and Coach Anderson and I have been together since day one. To be able to add two former players is an unbelievable feeling. We added a coach this year, Coach Reesa, who’s been a tremendous help. I’m glad to see her cut nets down for the first time. I’m excited for our program. It’s about the kids. To see them smile and see them happy is an unbelievable feeling as a coach. ”

The Lady Cards were led offensively by a balanced attack from their starting five. Each starter scored between nine and 16 points.

The Cards came out hot, scoring the first nine points of the ball game. The Lady Colonels answered back with a spurt of their own, scoring six of the next eight points, but the Lady Cards closed the quarter on a 9-2 run to take a 20-9 lead after the first quarter.

GRC was able to extend their lead by halftime with a seven-point run to end the quarter, but it was the Lady Cards’ defense that carried the team. GRC forced 13 first-half turnovers, nine of which came from steals.

The Cards did just that in the second half.

After leading 36-22 coming out of the break, GRC only allowed three made baskets from the Lady Colonels in the third quarter to push their lead to 51-29 entering the final period.

Just when you think a defense couldn’t get any better, the Lady Cards one-upped themselves. GRC didn’t allow a single basket in the fourth quarter. Bourbon County made six free throws in the final period for its only points.

The Lady Cardinals picked up the 70-35 win to secure their seventh district championship in a row and enter the 10th Region Tournament on a four-game win streak.

The Lady Cardinals will be joined by Bourbon County, St. Patrick, Mason County, Harrison County, Nicholas County, Bishop Brossart and Campbell County for a shot at the region title. The draw for the tournament will be Saturday and the games begin on Monday at Campbell County Middle School.

“10th Region girls basketball is tough. There’s going to be some great teams playing. We’re excited to be a part of it,” Graham said. “We know we’ve got a tough road ahead. We’ll take tomorrow off. We’ll go to the draw Saturday morning. We’ll practice Saturday night. We’ll prepare for whoever’s in front of us and do what we do.”

At this point in the season, nothing comes easy. George Rogers Clark’s boys basketball team found that out Tuesday night... read more