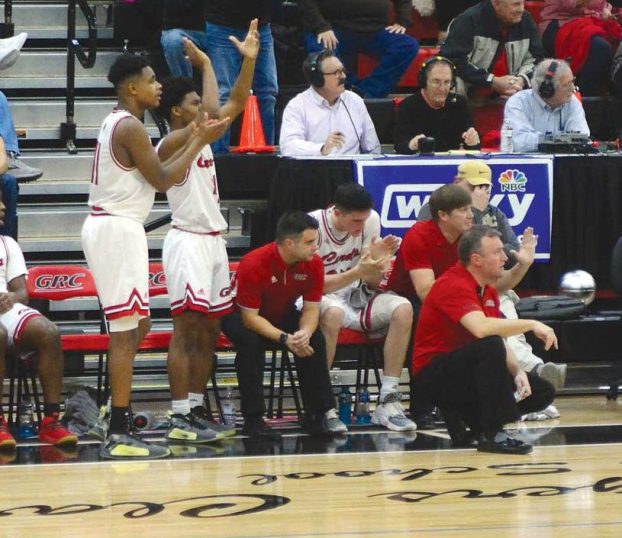 Jerone Morton and KJ Rucker stand up to applaud their teammates’ defensive efforts in the Cards’ first round game against Paris. (Photo by Roman West)

Rivals square off for district championship

The George Rogers Clark boys basketball team enters its fourth consecutive district championship game Thursday night with aspirations to become the first team to three-peat as district champs since the Cardinals did it from 2010-12.

The Cardinals’ biggest rival, Montgomery County, is the only thing standing in the way of back-to-back-to-back district titles.

The Indians are playing their best basketball of the season, winning eight straight games, including knocking off one of the favorites to win the region tournament, Bourbon County, in the first round of district play.

Hagan Harrison, younger brother of former Lady Cardinals standout Hayley Harrison, is the Indians’ leading scorer on the season and was the driving force behind Montgomery County’s 69-63 win over the Colonels Tuesday night. Harrison finished the first-round game with 38 points and 12 rebounds on the way to erase the 17-point first-half deficit the Indians faced.

The Cardinals held Harrison to six points in the first matchup this season, but Harrison exploded for 18 in the matchup in Mount Sterling. The Cards were able to pick up wins in both regular-season games.

Harrison will likely be matched up with the Cardinals’ Jerone Morton. Like Harrison, Morton is a sophomore guard who is the team’s leading scorer. Morton had one big game against the Indians in the regular season, scoring 23 points in the 59-52 win at MCHS Arena.

The frontcourt matchup will feature two of the top bigs in the region: Montgomery County’s Rickey Lovette and GRC’s Lincoln Bush.

Lovette’s best game against the Cardinals this season was a 13-point, 10-rebound performance in Montgomery County. Lovette has averaged a near double-double for the entire season, scoring 12.7 points per game and bringing down 9.1 rebounds per game.

Bush’s best day against the Indians came in a dominant 19-point, 21-rebound double-double in the Cards’ 60-51 home win. Bush is averaging a double-double this year, scoring 14.4 points and hauling in 13.2 rebounds per game.

After the state’s top rebounder was ruled ineligible this week, Bush became the state’s leading active board man this season, bringing down a total of 391 rebounds.

The two head coaches have battled for championships before. GRC’s Josh Cook, formerly at Mercer County, and Montgomery County’s Steve Wright, formerly at Southwestern, battled in back-to-back 12th Region Tournaments. In 2016, Cook’s Mercer County team downed Wright’s Southwestern squad on their way to a region title and a trip to Rupp Arena, something Cook would like to recreate in 2020.

The Cards and the Indians will tip at 7 p.m. Thursday night at GRC Arena.

At this point in the season, nothing comes easy. George Rogers Clark’s boys basketball team found that out Tuesday night... read more