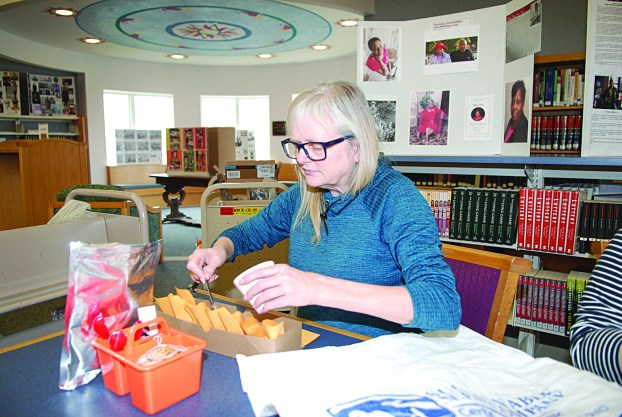 Librarian Angela Turner schools lettuce seeds into envelopes to be distributed during this year's seed library at the Clark County Public Library. (Photo by Fred Petke)

For the fifth year, the Clark County Public Library will be handing out dozens of varieties of seeds to anyone who wants them.

“This year we have 84 varieties,” Maruskin said. “We do have flowers. We do have herbs.”

There are plenty of vegetables available as well, including heirloom tomatoes, which started the seed library.

“We have 18 different varieties of tomatoes,” she said.

Anyone can come to the library and select up to 30 packets of seeds during the spring season, which runs from March through June, or fall which lasts from July to February.

The limit does not include seeds given out for attending any of the programs, she said.

“No one comes (to the programs) just to get seeds,” she said. “They come to learn.”

The programs, she said attract gardeners of all skill and experience levels.

Clark County’s seed library supports programs in six other libraries. A consortium of Clark, Bourbon, Bath, Madison, Lincoln, Harrison and Woodford counties purchase seeds in bulk, which are then distributed to the member counties, she said.

“(Ordering in bulk) really does significantly drop the price,” she said.

The program has proven to be extremely popular. In 2019, Maruskin said about 600 people participated and more than 20,000 packets of seeds were distributed.

The program can also have a major impact on local food supplies, she said.

“We figured if everyone grows two tomato plants and planted a plot the size of a table, it would be $1 million worth of food,” Maruskin said. “We don’t think of it as significant. It’s entirely up to that person for what they do, and they control that part of their food supply.”

Brack Duncan still wants to change the world. This time, he’s going to travel the planet to do it. Duncan,... read more