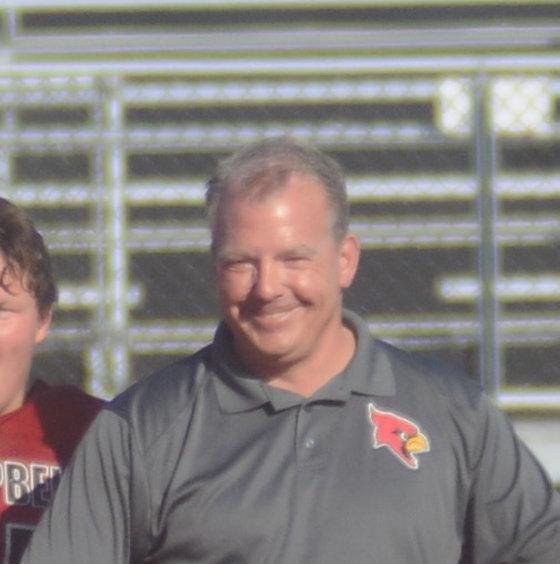 After serving as interim head coach to close out the 2019 Robert D. Campbell football season, Bob Howard’s interim tag has been dropped and he has become the full-time head coach.

Howard began the season as an assistant on the Cardinals’ staff before being named interim head coach at the end of the season.

“He was the No. 2 man last year, and when Tony Lanning resigned, Bob stepped up as interim coach without hesitation,” Ken Howard, RDC athletics director, said. “He took a program struggling and turned it around. On top of that, he’s just an overall great guy. The players respect and love him and he has a great relationship with parents. He’s just a good fit for our mission and philosophy here at Campbell Jr. High.”

After Bob Howard took over, the Cardinals’ finished the season strong. The eighth-grade team went 3-1 during Howard’s time as head coach and the seventh-grade team finished 2-2.

“We got back to the basics last year and we just stressed that these kids go out and have fun. With this mindset, the outcome of the games would take care of itself and we finished on an extremely high note,” Bob Howard said. “The entire coaching staff shares the same vision of playing fundamentally sound football. We know the strengths and weaknesses of our players which will enable us to put them in the right situation to be successful.”

Bob Howard is excited about what’s in store for his team next season and has several goals he wants them to accomplish.

“Of course we have a goal of competing for the conference title, but we also have to achieve our other goals to accomplish this feat,” Bob Howard said. “We want to teach our kids how to play fundamental football. We want our players to be leaders in the classroom as well as leaders on the field. We want our players to be respectful and hard workers. If we can accomplish this, I feel the winning aspect of the game will be reached.”

Bob Howard can’t wait to get started and is grateful for the opportunity that he’s been given.

“I’m excited for the opportunity that Mr. Dustin Howard and Mr. Kenny Howard have given me to continue the winning tradition for RDC football,” Bob Howard said. “This is a dream job and I’m extremely honored to be given the chance to lead this team of wonderful young men.”