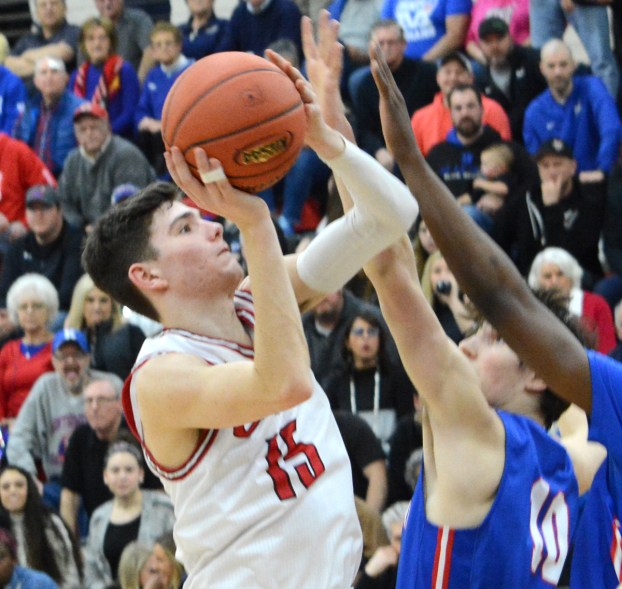 George Rogers Clark junior Jared Wellman smiles after cutting down a piece of the net after the Cardinals defeated Montgomery County 74-64 to win the 40th District title for the third straight season. (Photo by Keith Taylor)

The Cardinals (25-7) led by 14 points early in the second half and withstood a late rally by the Indians to keep its current seven-game winning streak intact. Montgomery County (20-12) opened the tournament with a thrilling 69-63 overtime win over district favorite Bourbon County Tuesday night.

Clark swept the Indians during the regular season and won all three games by a margin of nine points or less.

Clark remained undefeated at GRC Arena (6-0) and will host the 10th Region Tournament next week for the first time in nearly five decades. The Cardinals ousted Paris 62-49 earlier this week to earn a spot in the district finale.

Clark junior Jared Wellman led the Cardinals with 25 points and made five of his team’s eight 3-pointers in the contest. Wellman’s biggest contributions came in the fourth quarter when he sank a 3-pointer and completed a three-point play after the Indians narrowed a double-digit deficit to eight with five minutes remaining. Wellman eclipsed the 1,500-point plateau and now has 1,502 for his career.

“He made big shots,” Cook said. “The opportunities he had, he made the most of them. He’s a big shot maker and I’m proud of him.”

Wellman said the Cardinals stuck with their principles even during times of adversity, especially in the second half.

“We had our game plan, we stuck to it and kept playing as hard as we could,” he said. “The first half we played hard, but in the second half, we felt like we needed to take it up another level and played even harder.”

Wellman got plenty of help from his teammates as Lincoln Bush completed a double-double with 16 points and 15 rebounds. Bush yanked down 11 defensive rebounds, limiting the Indians’ second-chance opportunities. Jerone Morton added 16 points and dished out 11 assists, while KJ Rucker rounded out four players in double figures with 10 points.

“I feel like our guys right now are doing their job,” Cook said. “If you want to win championship games and if you want to play good in the postseason, your guys have to do whatever their job is and do it. Our guys are sold out with that and they’re doing a great job with that right now.”

Montgomery County got a game-high 24 points from Ricky Lovette, who sparked the Indians’ comeback attempt with 18 points in the second half. Lovette also pulled down 10 rebounds.