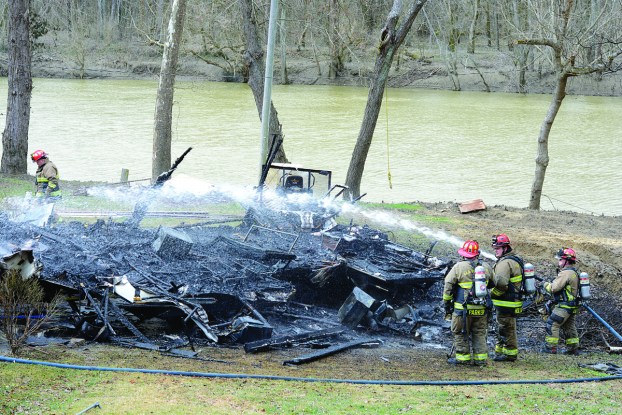 A firefighter soaks the remnantss of a recreational vehicle while others stand nearby. The RV burned to the ground just afer noon Thursday at 1501 Ford Road. (Photo by Randy Patrick)

Bruce Harrison’s quick response may have saved his house from going up in flames when he hitched a burning RV to his four-wheel-drive pickup and pulled it away from his home.

His pregnant wife, Monica Goodwin, was trying to fight the blaze with a water hose.

The recreational vehicle was destroyed, but there was no damage to the house and maybe only minor damage to the truck, said Harrison and Clark County Fire Battalion Chief William Jordan, the commander on scene.

Dispatch got the call at 12:29 p.m. that an RV next to a house was on fire at 1501 Ford Road, and it wasn’t known whether there was anyone inside.

A repairman who had been inside the RV to replace a 30-amp electrical plug had just left minutes before, Jordan said, and Harrison said the man had detected an electrical short when he started working.

Harrison said no one was in the trailer when it caught fire, and there were no pets inside. He had rented space for the RV to its owner, Debbie Brockman, and it was sitting right beside the house and next to hay bales when the fire occurred. He said moving the RV was risky, and he couldn’t see through the smoke, but if he hadn’t, he would have lost the house.

What Harrison was most concerned about, he said, was an older resident, a Vietnam veteran, who rented an apartment above their house. The man sometimes sleeps during the day and might not have been aware of the danger, he said.

For the past decade, Kentucky has lost out on millions of dollars in federal funds that could have benefited children... read more