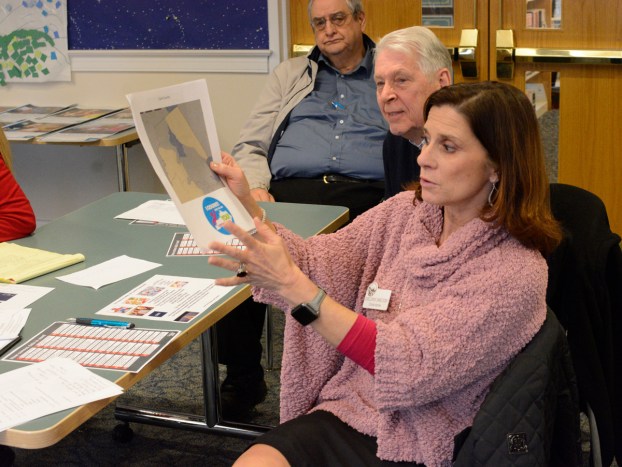 Chamber of Commerce Director Cindy Banks presents some map information at a census count meeting Wednesday at the Clark County Public Library. To her right are Coos Ockers and Mayor Ed Burtner.

For the past decade, Kentucky has lost out on millions of dollars in federal funds that could have benefited children because, it is estimated, 12,500 of those under the age of 5 years old weren’t counted in the most recent census.

Local leaders want to do everything they can to make sure that doesn’t happen this year, so those representing the county schools, public health, the business community, city and county government and other community stakeholders are working together to promote the 2020 census count, which begins next month.

On Wednesday, about two dozen participants of the Clark County Complete Count Committee came together at the Public Library to brainstorm about how they could get the word out about the decennial tally and encourage greater participation.

In the meantime, participants are working on different parts of the plan.

On March 12, letters will go out from the U.S. Census Bureau to residents informing them of their responsibility to comply with the count and providing instructions on how to respond by mail, telephone or online. April 1 is Census Day, and by then, every household should have been notified.

“Mid-May is when the enumerators will hit the streets and start going door-to-door with the forms and start asking questions of the residents,” Stephen Berry said.

If the people aren’t home, they will leave notices with a code they can use to register online.

Between March and April, there will be a count of homeless people and college students.

July 31 is the last day for people to respond.”

“First and foremost, it’s the law,” Berry said when asked why it’s important for people to be counted.

Constitutionally, the main purpose of the census is to allocate political representation. The districts for the 435 seats in the U.S. House of Representatives are based on population. If a state is undercounted by 10 percent or more, it could lose a House seat. That’s a real possibility in Texas, for example, where there is a large Hispanic population.

The other major reason for the census is to determine how much money states get in block grants for everything from education funding to medical and public assistance to transportation and environmental programs.

Berry said the funding impact for Kentucky of uncounted persons is about $2,000 per capita.

“For every person that’s not counted, that’s about $2,000 per person per year that isn’t coming to Kentucky through federal programs,” he said.

The census occurs only once every 10 years, so the information collected now will determine funding and legislative representation through 2030.

And this community’s track record in complying has not been good.

“During the last census, Clark County’s participation rate in the census was around 76 percent,” said Shanda Cecil, the local code enforcement officer. “That is much too low. In order to get accurate numbers and the funding we need, we need to shoot for an 85 percent or better participation rate.”

Last time, enumerators had to go door-to-door to try to count 24 percent of the county’s population.

“One of the primary reasons people do not respond is that they think the government is corrupt,” and so they don’t want to provide information, according to the Census Bureau’s own research, Berry told those attending the meeting Wednesday. “Those kind of people, we’re never going to convince them, but we can identify populations that are traditionally undercounted,” he added.

Those that tend to be most often undercounted are the poor, households with small children and the Hispanic population, he said.

Talking about reasons people don’t comply, Berry said in an interview the next day, “there’s everything from crazy conspiracy theories” to practical concerns.

For example, Hispanic residents may have a family member who is in the country illegally. But the Census Bureau is forbidden from sharing specific information about individuals with Immigration and Customs Enforcement or any other agency. Federal law, he said, prevents any government agency from using census responses for anything other than assigning representation or creating statistical summaries.

“They can’t give individual names and addresses,” he said. “The exact information from your census response will be confidential for 72 years under the law.”

Another big problem, he said, is people not counting newborns. Just because the child doesn’t have a Social Security number yet doesn’t mean they can be exempted from the count. They’ll be 10 years old by the time the next count comes around.

Berry said, unlike California, which is spending $180 million on the Complete Count initiative, because it will get more than $1 trillion in federal aide over the next 10 years. Kentucky is spending nothing.

The Complete Count is a federal initiative, but it is not mandatory. The local people participating on the committee are volunteering their service.

“Clark County is late to the game,” Berry said, and has to work quickly to coordinate the response.

At the meeting Wednesday, they discussed who would do what. For example, Bridgette Mann, who administers migrant education and other programs, would have a representative of the committee speak at a school board meeting on March 16, Berry and Emergency Management Director Gary Epperson will come up with messages to be included in utility bills, and John Maruskin will have bookmarks printed to hand out at the Clark County Public Library and develop a simple guide for how to complete the census form online.

Maruskin said the library can’t let the group come in and use the public access computers because there are 1,800 patrons a month who use those, but it can provide laptops for the committee members, and the patrons can use the desktops to fill out the forms online.

“We’ll be dealing with it every day,” reference librarian Andy Gary added.

More information about the census is available at www.census.gov.

First Baptist Church at 37 N. Highland St. will host a first-time home buyers this Saturday from noon to 2... read more