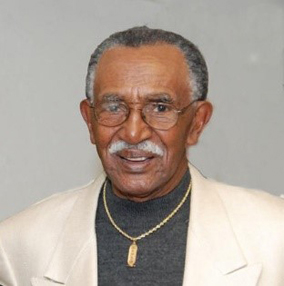 Where in the World: Sherman Greene remembers part 2

By Harry Enoch and Jane Burnam

For The Winchester Sun

During World War II, “I was in high school—just marking time until I could go into service.”

Sherman Greene’s dad had served in the Argonne Forest during World War I, and his brother was then serving in the 92nd Infantry. When Sherman finally got his wish, the war had ended.

In December 1945, at age 16, he enlisted in the Army Corps of Engineers for a three-year hitch. He recalled going to Camp Atterbury near Indianapolis with a brand new pair of shoes.

“We had to walk around in deep snow. I dried my shoes at the stove one night and the soles turned to crust.”

From there, they sent him first to Fort Lewis, Washington, for basic training. He then went to Camp Kilmer, New Jersey, for three months, expecting to go overseas, “But an order came down that no more colored troops would be sent to Europe.”

He went next to nearby Fort Dix then to Fort Benning, Georgia.

“I was working as a lineman. The MP’s were hard on blacks in camp, but the police in town were really bad. I ended up there once — took the wrong bus.”

Still on the move, he went to Camp Stoneman, California, where he shipped out on the USS Sea Devil, a converted cargo ship carrying 1,500 troops. After 28 days at sea, they landed in Manila during the postwar occupation. There, they guarded prisoners.

Once, when he tried speaking Filipino (Tagalog) to a native, the man answered, “Don’t you speak English?”

Sherman was with the 97th Combat Engineer Unit, an all-black regiment. His next assignment was to Guam with the 1315th Combat Engineers. They built Quonset huts and a PX. From there, he went home on emergency leave to visit his sister who was terminally ill.

Back in California, Sherman served in the 1900th Station Compliment.

While unloading pillows, he got a strain and had to undergo hernia surgery.

He finished his service in Oakland with graves registration. While there, he played football with the Oakland Air Base Knights and had the opportunity to go against Joe Perry’s old team at Treasure Island Naval Station. Perry had gone on to a career with the San Francisco 49ers and became one of the NFL’s first black stars.

Sherman mustered out of the service after two years, 11 months and 28 days. He had planned to make a 20-year career, but the Army wasn’t interested in keeping blacks in the then-segregated military.

Back in Winchester, Sherman pondered his future.

“I was thinking of barbering, but a friend of mine recommended shoe repair instead. He was a barber.”

Sherman enrolled in shoe repair at the West Kentucky Vocational School in Paducah. In late 1949, with a flood closing in on the campus, Sherman came back home and couldn’t return in time to take his final exam.

“Fortunately, President Timberlake was good friends with the principal at Oliver School, George Adams, who could give me the test. The day I went in, Professor Adams was out of the office. I met the student he left in charge, a Miss Chambers, who later became my wife.

“I remember our best date ever. It was a Thanksgiving dance, 1949, at Joyland on Oliver Street. The band was late, but it was 60 degrees, and everybody had a good time. The next day came the deepest snow we ever saw. Ann and I got married on Dec. 22, 1951.”

Ann and Sherman have three daughters: Janice, Juanita and Natalie.

Sherman worked at shoe shops in Winchester, including Gay Berryman’s on Broadway and Walter Shurig’s on Main. After Shurig, a man named Suder ran the shop.

“Told a lot of ethnic jokes. Didn’t like him,” Sherman said.

After taking off work one Saturday — their busiest day — to attend his grandmother’s funeral, Suder told him if he missed another he’d be fired. It wasn’t long before Sherman decided to attend a Cincinnati Reds ballgame on a Saturday.

“We went up in a ‘may-make-it’ car with ‘may-pop’ tires. Didn’t make it back. Got home late Sunday night or early Monday. I never went back to the shop.”

Sherman said the shoe repair business was dying out.

“Thom McAn shoes came along. They had neoprene soles that outlasted leather.”

Jobs opened at the Army Depot at Avon. Sherman applied for a warehouse position and was hired as a laborer.

During his 30 years at “Avon,” he worked many positions, including heavy-equipment operator and tractor-trailer driver for the commissary. He also worked a few years at the Bluegrass Army Depot in Richmond.

During his spare time, Sherman coached a Pony League team in Winchester. He remembered in 1959, when it was his turn to coach in the All Star game, “Couldn’t make it. I had a heart attack.”

In 1958, he was master of the Mosaic Lodge No. 25 of the Free & Accepted Masons when they laid the cornerstone for Broadway Christian Church.

Sherman and his family were living in a house on Maple Street when the area was cleared for the new underpass for the Expressway.

They moved to Lexington. He’s been there since 1964, but still stays in touch with friends and activities in Winchester.

Before we left, he shared one more story: “I did some bartending and worked parties in Lexington. At a Kathy Gentry party, I heard they were going to film a movie, ‘The Dreamer,’ in Lexington with Kurt Russell and Dakota Fanning. I put my name in for an extra and I got it. They filmed at the Carnahan House. I’m in two scenes.

“I was in Seabiscuit too. In a bunch of scenes in that one. But they all ended up on the cutting room floor.”

Sadly, we could tell only a few of Sherman’s many stories here. His entire interview can be heard on the Bluegrass Heritage Museum’s website: www.bgheritage.com/.

Don’t think for a second I am not aware of the difficulty pet owners face when administering medication to their... read more