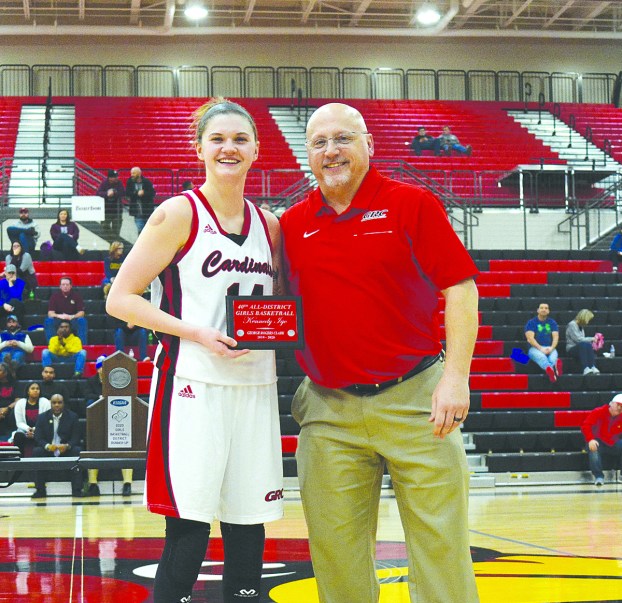 Kennedy Igo, pictured here as she was selected to the All-District tournament and season-long teams last week, led GRC to a 63-30 victory over St. Patrick on Monday. GRC is on a quest for its fourth straight 10th Region Championship. (File photo)

Lady Cards get big win in quest for fourth title

The Lady Cardinals were flying high and fast as they opened the defense of their 10th Region title streak Monday against St. Patrick (16-13).

The defending champs raced out early and finished with a 63-30 victory. GRC (19-10) has claimed the regional trophy three straight years and got off to a good start in their quest for a four-peat.

GRC won the tip and Kennedy Igo scored the first bucket to give the Cards the 2-0 lead. St. Patrick got on the board with 2 free throws from Libby Gallenstein to make it 7-2.

That would be the only points for the Lady Saints in the first quarter as GRC scored the next 9 points to make it 16-2 after one quarter.

GRC took a 36-11 lead into the locker room. The Lady Cardinals outscored St. Patrick 24-11 in the third to head to the fourth up 60-22. GRC began the fourth quarter with substitutes as the starters went to the bench. Nicole Davis would hit a 3 pointer with just under 6 minutes remaining to score the only points for GRC and the Lady Saints season ended at 16-14.

The Lady Cardinals will return to northern Kentucky to face Bishop Brossart at 6 p.m. Friday. Bishop defeated Harrison County 52-28 earlier Monday. GRC is looking to avenge a regular season loss 54-55 in Winchester  on Jan. 18. The Lady `Stangs were the 10th Region All A Champions and have a record of 24-5.

By Keith Taylor For The Sun It’s hard to beat a team three times in a season. The George Rogers... read more