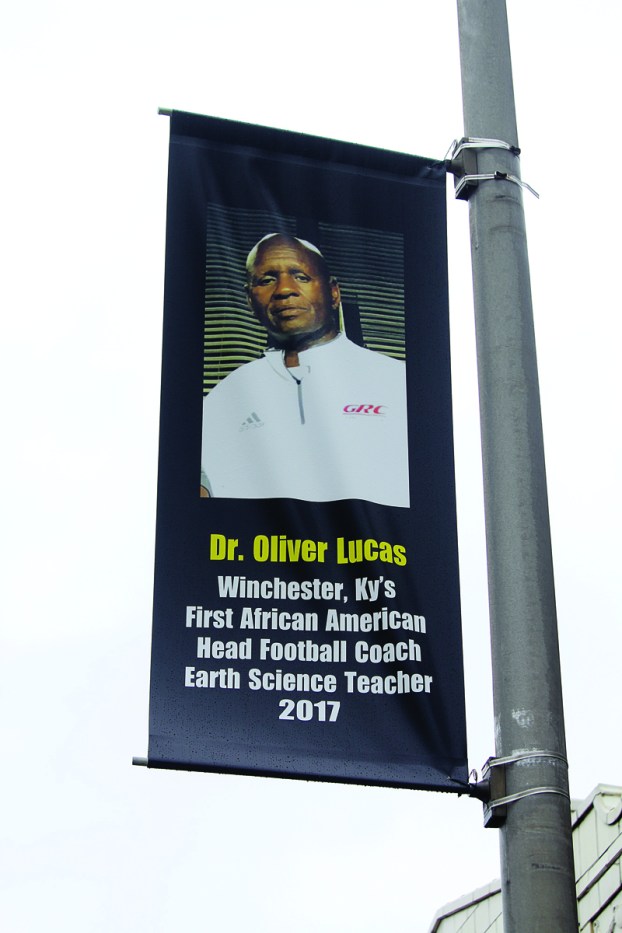 Deatra Newell just wants the younger generation to know they can succeed, and there are people from Clark County who are proof of that.

That’s the motivation behind Newell’s most recent project, a collaboration with the City of Winchester and Main Street Winchester to have banners installed along Main Street.

The Barrier Breaking Banner Series was installed last week and features five black Clark Countians who are the first to accomplish a number of things.

There are educators, coaches, veterans and public servants honored through the series.

The banners are displayed along Main Street, with Lucas’ banner at Leeds on North Main Street. Martha Miller’s and Hudson’s banners hang near the courthouse. Farris’ banner hangs in front of Community Trust Bank, and Thomas Miller’s hangs at the Bluegrass Heritage Museum on South Main Street.

Newell said she came up with the idea as a way to honor local black history and inspire young black people in Clark County.

“We always reach outside Winchester for inspiration,” she said. “We look to people like Harriet Tubman, Martin Luther King Jr. and Rosa Parks, people who made history a long time ago. But it’s important in Winchester, because there’s nothing for our kids to do, and they don’t see a lot of potential around here of what they can become.”

Newell wants to change that mindset.

“I thought about the people in our community who have broken barriers,” she said. “I thought with them being alive, all but two, but they’ve been around these kids before they passed, that it’s important for the children to know the heritage of the African-Americans in the community.”

She said she wants the community’s children to know they can aspire for more.

“I want them to know that there’s more to the current generations than drugs and sagging pants and that kind of thing,” she said. “I thought it would be important for them to see that good could come from this community.”

Newell took the idea to City Manager Matt Belcher, who immediately jumped on board.

“He was very receptive, and I so appreciate him because he has the best of all people in Winchester concerned, not just part of Winchester,” she said.

Belcher said he thinks the banner series could be the start of something more in the community, to recognize individuals from all walks of life who have made an impact, maybe veterans, all-star athletes, students, business leaders, civic leaders and more.

“I think it is important for us to be all-inclusive and make sure we are recognizing those people who make an impact,” he said.

Newell said she also saw a lot of support from  Mayor Ed Burtner, who has long been a champion for the African-American community in Clark County.

The Main Street Winchester board approved the series and gave about $1,000 to fund the project, Belcher said.