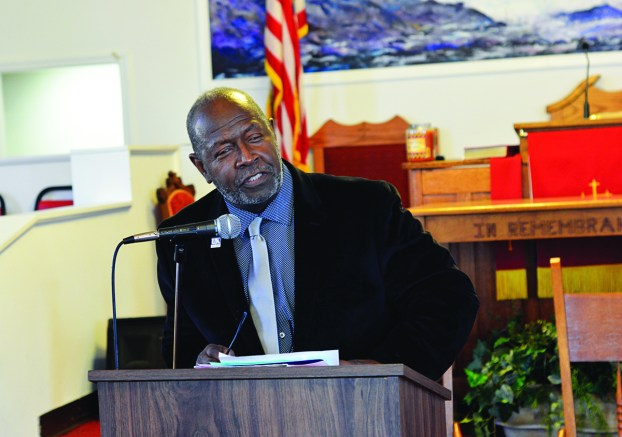 Emmett "Buzz" Burnam, an academic recruiter for the University of Kentucky and former Wildcats football player, talks to the crowd gathered at Corinthian Missionary Baptist Church for "Sharing Our Stories," a Black History Month event. (Photo by Randy Patrick)

In the beginning, there was the spoken word.

Long before history magazines, TV documentaries or books on Kindle, there were story tellers, and the African-American community has a rich legacy of oral history.

At Corinthian Missionary Baptist Church Saturday, about 60 members of the community came together to close out Black History Month by hearing local leaders from across generations and vocations talk about their lives and times.

Ruth Taylor remembered when people of color weren’t welcome to sit with whites at lunch counters. Alesia Jones, a librarian, Walter Newell Jr., an entrepreneur and Harvey Embry Sr., a retired farmer and military veteran, talked about their lives and careers. Sharon Morris shared about her service in the military. And Emmett “Buzz” Burnam, a former Kentucky Wildcat and academic recruiter, entertained the crowd with football stories and talked about the progress the University of Kentucky has made in diversifying its student body.

The event was sponsored by the Winchester Black History and Heritage Committee.

Taylor, a 99-year-old matriarch, remembered riding a horse to school every day when she was 8 or 9 years old.

“The horse would stay there all day, and then we would ride him back home,” she said.

“We couldn’t use the bathrooms at the courthouse, and we couldn’t sit down at the drug store,” she said.

Newell, 88, also talked about his school days and working with his father and his partner in their furniture business — building, repairing and refinishing desks, tables and other furniture.

“He was one of the most productive workers I’ve ever seen,” he said.

Alesia Jones began working when she was only 14 by lying about her age, she said.

A year later, she started working for the Clark County Public Library during its summer reading program, and more than 40 years later, she still works there as a reference desk librarian, although most patrons know her by another name, “Darlene.”

“Now I’m about to start a new chapter in my life,” she said. “I’m going to retire and get married.”

The room broke into applause at the good news.

Embry recalled growing up on his grandparents’ farm and using a team of horses to haul wheat to a threshing machine. He earned a dollar a day and worked until dark.

He remembered joining the Army at 21 and the indignity of being transported with other black soldiers in a cattle car in the nation’s capital.

He went to Fort Knox, Japan and Korea and was a jeep driver for a lieutenant. After returning to the States, he was stationed at Fort Campbell, eventually returning to Winchester, and has been here ever since.

Morris made the military her career. She joined the Air Force, became a technical sergeant and served at many bases, including Fairchild AFB in Washington State, at the time of Mount St. Helens’ eruption, and Ramstein Air Force Base in Germany, where she had responsibility for every engine in every aircraft. She also served during Operation Desert Storm in 1991.

Morris also advised that the military is a good way to further one’s education and learn leadership skills that can be transferred to other vocations.

“Even four years in the military will take you far. The training is invaluable,” she said.

The audience gave her a standing ovation when she said she was proud to have served her country for 20 years in the Air Force.

Burnam said his father nicknamed him “Buzz,” and it’s the only name by which most people know him.

He brought laughter with a story about how proud he was of the “football suit” his mom bought him at Ben Snyder’s department store when he was in the fourth grade, and how scared he was when he got to play in a game against some “big boys.”

“They ran a play right at me,” he said. But when the dust cleared and he came to his senses, he found he was holding onto the offensive player’s leg “for dear life” and heard someone yell, “Way to go, Buzz!”

Burnam said that when he first started recruiting black students to UK, minority enrollment was about 3 percent. Now it is close to 12 percent.

Joyce Morton, who emceed the event, commended the speakers for sharing their stories.

“We’ve got something to be proud of,” she said.

And the Rev. Ronald Burns, pastor of the host church, said that in his experience as a student of history, African-American heritage isn’t always given its due in classrooms, so it’s important people tell their own stories.

Deatra Newell just wants the younger generation to know they can succeed, and there are people from Clark County who... read more