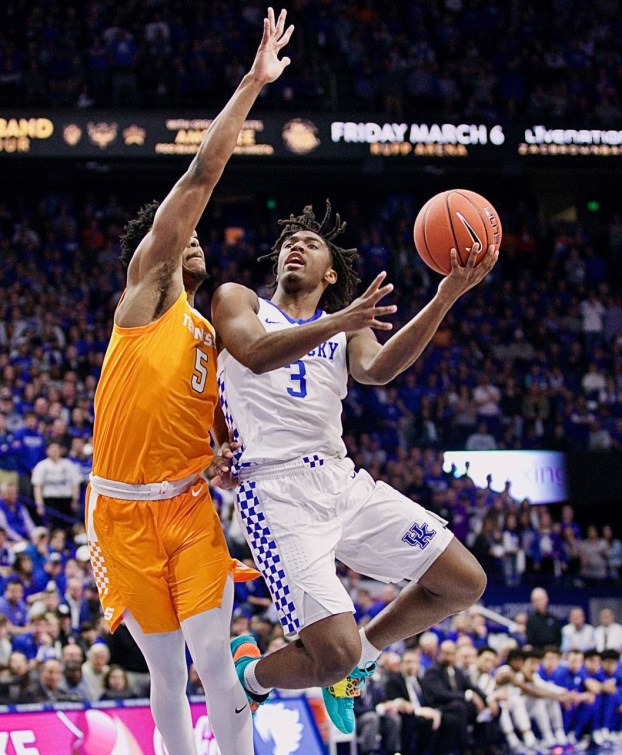 LEXINGTON — Kentucky’s loss to Evansville earlier this year haunted the Wildcats. A shocking 81-73 setback to Tennessee in the home finale Tuesday night dealt another blow to the team’s NCAA Tournament resume with one game remaining in the regular season.

Kentucky blew a 17-point lead and the Volunteers were nearly unstoppable in the second half. Behind a monstrous 29-9 run, Tennessee took control of the game by taking a 63-60 lead with five minutes remaining and didn’t look back. Kentucky tied the score at 63-63 but failed to regain the lead down the stretch.

“The game got physical and we couldn’t compete,” Kentucky coach John Calipari said. “They made some incredible shots, some threes, and they just kept coming. If you’re not willing to be physical you’re not going to win games.”

Kentucky leading scorer Immanuel Quickley missed his first six shots and scored just five points in the first half. Freshman guard Tyrese Maxey picked up the slack for the Quickley in the opening half and scored 14 points. Maxey scored Kentucky’s first five points and added five more in a 10-0 run later in the half that stretched the margin to 24-11.

Quickley finished with 15 points for the Wildcats and has scored double figures in 19 consecutive games. Maxey led four players in double figures with 21 points. Nick Richards had 12 points and Ashton Hagans added 11.

The Wildcats honored graduate transfer senior Nate Sestina and also paid tribute to managers Kevin Gallagher, Barrett Bouska and Will Evans prior to the contest. Sestina made his first start since Kentucky’s 81-56 win over Lamar on Nov. 24.

Sestina came off the bench and tallied 11 points in the Wildcats’ 73-66 win over Auburn last Saturday and scored nine points in the opening half in the absence of Richards who sat out most of the second half because of foul trouble.

Sestina completed the first half scoring on a follow-up dunk on EJ Montgomery’s missed jumper at the buzzer. It was his only two points of the contest.

Kentucky had a hard time containing Tennessee’s John Fulkerson, who scored a career-high 27 points. Fulkerson made 10-of-5 field goals and grabbed six rebounds. It was Fulkerson who kept the Volunteers from falling apart with 15 points in the first half as Kentucky built a 17-point lead that crumbled to pieces in the second half.

“Fulkerson killed us,” Calipari said. “We tried a lot of different things to slow him down. He was a tough hurdle for us (to overcome).”

“He was terrific,” Barnes said. “What he did tonight was one of the greatest performances I have witnessed.”