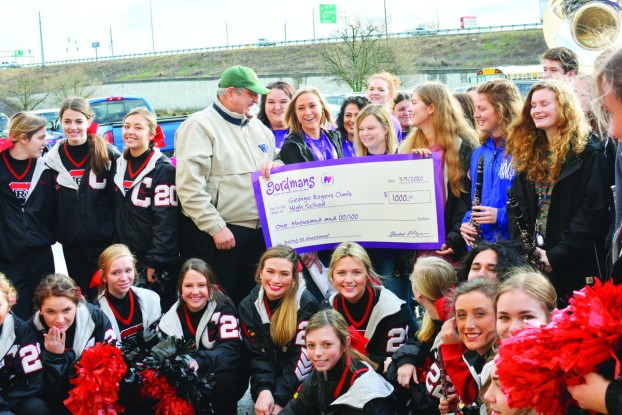 George Rogers Clark High School provided a brass band, and cheerleaders performed during the opening ceremony, which included a chamber ribbon cutting, remarks by the mayor and presentation of a $1,000 check to a GRC leadership program.

Afterward, the store was crowded with customers looking for bargains.

Within minutes of the store’s opening at 9 a.m., Stacey Parido’s cart was half full.

Parido had never shopped at a Gordmans, but Jamie Lowe and her aunt, Samanta Crowe, were familiar with the one in Lexington.

“They’ve got some good deals,” Lowe said as they shopped for shoes for her little boy.

“I think it’s the off-price content,” she said. “We basically research for new and exciting merchandise at discount prices.”

Gordmans doesn’t have its own brands or “set merchandise,” she said. The company shops for the best deals, so what’s offered at the store is “ever-changing,” she explained.

Some of the young female sales associates said young women like Gordmans especially because they can find nice clothes for a nice price.

Customers may have their Amazon orders shipped to Gordmans’ in-store Amazon counter for package pick-up.

Gordmans is located where the former Peebles store was. The parent company of both chains, as well as Goody’s and others, announced in 2019 that it was rebranding all its stores as Gordmans. From Harlan to Bardstown, Peebles stores were changing over to Gordmans Tuesday.

Ginn said the company has approximately 700 stores nationwide, all of them owned by the corporation.

The store is an anchor for the Winchester Plaza, which was once mostly vacant, but is now almost completely full after it was renovated several years ago with the help of a tax incentive program.

Stuff Recycling is asking for a variance to allow it to build fences or screens up to 30 feet tall... read more