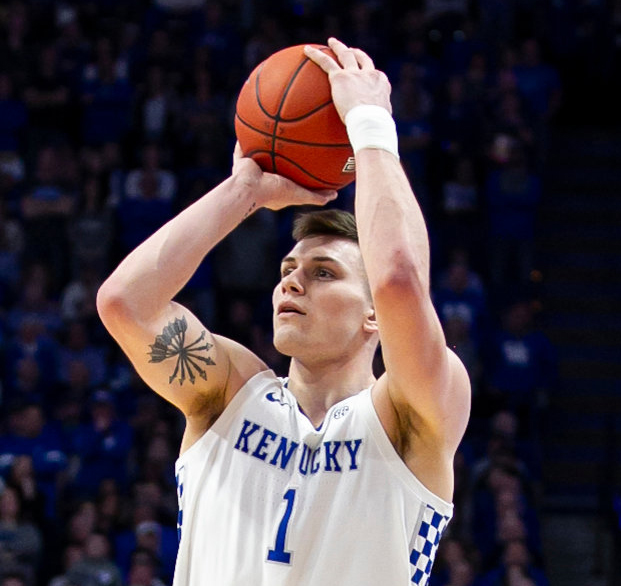 Kentucky senior Nate Sestina scored 11 points in Kentucky’s win over Auburn Saturday at Rupp Arena. Sestina has been giving the Wildcats a much-needed boost off the bench during the past two weeks. (Kentucky Today/Tammie Brown)

LEXINGTON —Nate Sestina wants to finish the season on a strong note.

The Kentucky senior forward will be honored prior to the Wildcats’ home finale against Tennessee set for Tuesday night at Rupp Arena and has described his lone season in Lexington as a “rollercoaster.”

Sestina led Kentucky in rebounding in wins over Michigan State and Eastern Kentucky and yanked down a season-high 12 boards in a win over Utah Valley State. He scored a season-high 17 points in a 71-65 loss to Ohio State on Dec. 21, but cooled off once conference play began and didn’t score in three games in February.

Despite the slump, Sestina has been giving the Wildcats a much-needed lift off the bench, especially during two of the past four games. He scored 11 points in a 79-76 win at LSU on Feb. 18 and matched that total in Saturday’s 73-66 triumph over the Tigers.

Sestina provided a boost for Kentucky with nine points in the first half against Auburn, while filling in for Nick Richards who played just four minutes in the opening half because of foul trouble.

“I just want to do something for us,” Sestina said. “I didn’t do a whole lot down at Auburn, so for us, whether I was going to put the ball into the hoop, defend or try to stay out of foul trouble which I did until the second half, but whatever I needed to do to help us out.”

In addition to Sestina’s contributions, it took a team effort for the Wildcats to hold off the gritty Tigers in a win that gave Kentucky its 49th Southeastern Conference title and top seed for the upcoming conference tournament.

“It just shows what kind of team we are,” Sestina said. “The guys stepped up today and coach needed that from us — me, E (Ej Montgomery), Nick (Richards), Keion (Brooks Jr.) and Johnny (Juzang). He’s just been talking to us about stepping up, and how we can’t just rely on Tyrese (Maxey), Ashton (Hagans), and Immanuel to score all of our points and get stops for us, so it was big for us.”

Sestina added that Saturday’s season-high crowd played a role in the comeback victory.

Auburn, which defeated the Wildcats 75-66 earlier this month, is the type of team Sestina said Kentucky will face in the Big Dance and gives the Wildcats confidence going into the final week of the regular season. Following the home finale Tuesday, Kentucky closes out the schedule at Florida Saturday.

By Keith Taylor For The Sun For the first time in 51 years, the George Rogers Clark High School boys... read more