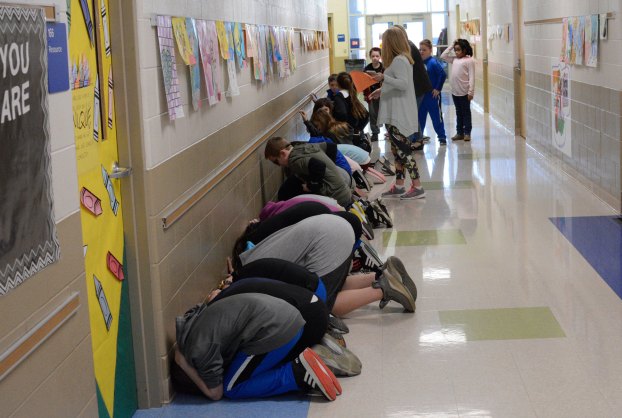 Teachers make sure the children are accounted for and positioned as they should be during a severe weather drill Wednesday morning at Willis H. Justice Elementary School. (Photo by Randy Patrick)

When the alarm sounded at 10:07 a.m. Wednesday, the children at Willis H. Justice Elementary School quietly left their classrooms in single file and lined up in the hallways facing the walls in a “duck and cover” pose with their heads down and hands over heads.

The tornado drill was part of a Severe Storm Preparedness Week exercise performed simultaneously by every public school throughout the state as well as by many private schools and businesses.

The kids performed the drill well, said Clark County Emergency Management Director Gary Epperson, who was there to observe.

“They do a good job of keeping kids prepared for emergencies … and keeping everybody safe,” he said.

“They know exactly what to do and where to go and the proper procedures, and they were quiet this time, which was good,” Principal Susan Hillman said.

The severe weather drills are something the school practices every year, she said.

Their importance was underscored a few years ago, she said, when school personnel spotted a real tornado through the back windows. The funnel cloud never touched down but was clearly visible, she said.

“These buildings are not necessarily built for that, so it’s really important that these kids know where to go,” she said.

That’s true whether they are in their classrooms or the cafeteria or anywhere else, she said.

She said there are maps in the classrooms to show where to go for different kinds of drills.

Moments after the severe weather test, the school also practiced a fire drill, and teachers led the students outside.

The sweet and whimsical adventures of Charlie in Willy Wonka’s Chocolate Factory come to life in Roald Dahl’s adaptation of... read more