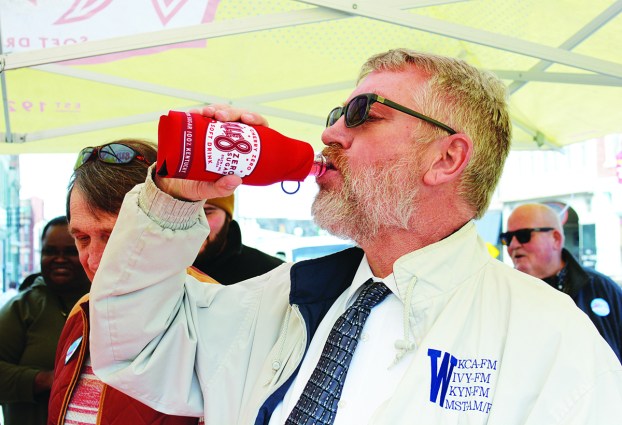 Radio reporter Jeff Ray gets his first taste of a Cherry Ale-8 Zero Sugar during the introduction of the new product at a promo party on the Clark County Courthouse lawn Thursday. (Photo by Randy Patrick)

Hometown folks got to try it first.

Fifty people or so lined up on the courthouse lawn Thursday afternoon for the official introduction of Ale-8 One’s newest product, Cherry Ale-8 Zero Sugar.

They were given cold beverages and souvenir bottle coolers with the product’s logo and the words, “I tried it first.”

“We’ll just keep handing out drinks until we run out,” Chris Doyle, the marketing director, said.

The Kentucky Taste Buds — Tamara Schneider and Leigh Roach — bloggers and social media mavens who have a radio program on KISS 96.9 — were the announcers for the event. They asked everyone to take a picture of the product with their smartphones and post it on social media using the hashtag, “I tried it first.”

Then, they did a countdown, and Nicole Porter, an Ale-8 employee, set off a cherry red smoke flare, and the crowd cheered.

“It’s very good. Not too sweet. It doesn’t taste like fake sugar,” Cameron Correll said after her first taste.

Harold Ritchie described it as “delicious,” and said it didn’t have an aftertaste like some diet drinks do.

“It’s really good,” said Katherine Smith, an AmeriCorps worker in Winchester. “It has a lot of flavor.”

The new drink is similar to Cherry Ale-8, but is flavored with sucralose and has no sugar.

“The best part about it is it’s 100 percent Kentucky!” one of the Taste Buds said.

“They’re all about celebrating great things about Kentucky, which is what we want to do as well,” Doyle said of the ladies.

Another tasting was scheduled for Friday afternoon at The Barn at the Summit in Lexington.

The product will be on area retailers’ shelves the week of March 9.

Winchester has a new support group for people with substance abuse disorders. The group meets every Tuesday from 9 to... read more