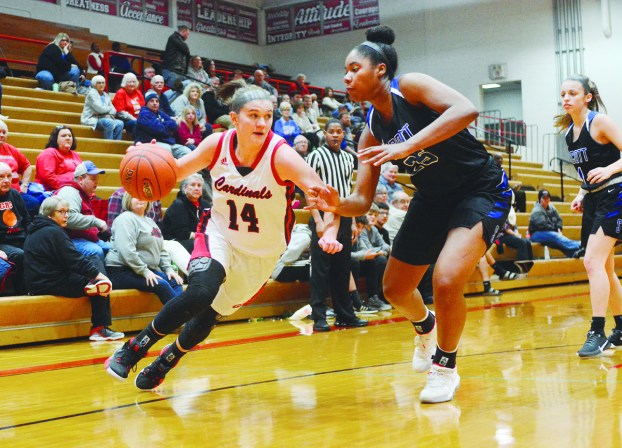 The George Rogers Clark High School girls basketball team took care of business and rolled to a 63-30 win over Marysville Saint Patrick in the opening round of the 10th Region Tournament earlier this week.

In a quest for their fourth straight regional title, the Lady Cardinals (20-10) face a tougher challenge Friday night in a 6 p.m. tipoff against Bishop Brossart at Campbell County Middle School. Clark coach Robbie Graham said the Lady Cardinals are expecting a fun atmosphere in the first of two semifinal contests. Host Campbell County and Bourbon County meet in the second game, with the winners meeting for the championship.

“We look forward to playing in the region semifinals,” Graham said. “It will be an eclectic atmosphere with some really good basketball.”

It also should be a close contest simply based on an earlier-season meeting between the two region foes. The two teams met on Jan. 18 in Winchester with the Lady Stangs notching a 55-54 victory at Norton Gymnasium.

“Brossart is a really good team and poses a tremendous challenge for us,” Graham said, “They are well-coached and have a premiere player not only in a region but in the state.”

That player is Marie Kiefer, who enters the contest averaging 17.7 points per game and will be counted on to carry most of the load for the Lady Stangs.

Brossart (24-5) lost to Campbell County 48-42 in the 37th District finals, but have won six of its past seven games, including a 52-28 win over Harrison County in the opening round of the regional tourney earlier this week at Campbell County.

Brossart won the 10th Region All “A” Regional title but dropped a 33-33 setback to Owensboro Catholic in the opening round. The Lady Aces lost to state runner-up Walton-Verona in the state semifinals.

Clark will be led by senior guard Kennedy Igo, who leads the team with 15 points per game. Igo has made 66 3-pointers this season for the Lady Cards. Brianna Byars (12.1 ppg) and Tyra Flowers (10.2) also provide a bulk of the scoring for Graham’s squad.

Graham said “rebounding and valuing the ball will be extremely important” and added that he expects a big crowd to make the trek from Winchester to Alexandria.

“We need our GRC faithful to show up and show out for these young ladies,” he said. “Brossart will have a tremendous crowd playing in their back yard.”