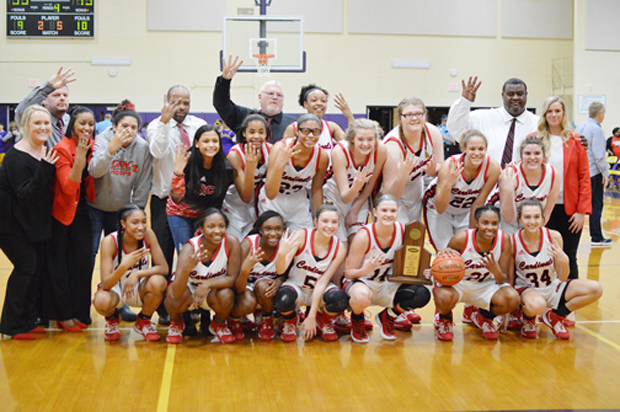 The Lady Cards topped the Campbell County Camels 55-45 for the 10th Region championship, sending GRC back to the Sweet Sixteen in the state’s most famous basketball arena.

The George Rogers Clark Lady Cardinals have made a run to the KHSAA State Tournament for three consecutive years, and this year is no different. The Lady Cards topped the Campbell County Camels 55-45 for the 10th Region championship, sending GRC back to the Sweet Sixteen in the state’s most famous basketball arena.

Coach Robbie Graham said he was pleased with the way the Lady Cards (22-10) were able to execute on the offensive end and move the ball, as well as how they played tough defensively for 32 minutes.

After struggling at the line in Friday night’s game, Graham said they were huge this game.

“Free throws were key for us on the offensive end tonight,” he said.

From the moment the Lady Cards tipped-off, the players and staff knew it was going to be a hard-fought game down to the very last minute of play. The Camels were not going to easily hand this game over to the Lady Cards.

GRC played neck-and-neck with Campbell County the entire first quarter, leading by one point at the end of the first, 13-12.

The Lady Cards began kicking things into gear during the second quarter, working hard on the offensive end to stretch the lead over the Camels. Kennedy Igo found a good stretch of momentum, hitting back-to-back threes at the end of the quarter. GRC led 27-20 going into the second half.

The Lady Cards continued to dominate on both the offensive and defensive ends during the third quarter. Shelbi Wilson played solid defense, forcing a five-second call on the Camels and giving the Lady Cards the ball right before the buzzer. Heading into the final eight minutes of play, GRC was on top 40-29.

After her 15-point third quarter, Bri Byars ripped through hard and drove to the basket getting the and-one play as the final quarter opened.

The Lady Cards outscored the Camels by 10 points, making them the 10th Region Champions for the 2019-2020 season.

Players and coaches said the championship journey was a team effort from the very beginning of the season. GRC’s two seniors — Kennedy Igo and Shelbi Wilson — were key leaders this season, helping their team on the drive to get back to the state tournament.

“The feeling honestly never gets old,” Wilson said. “And being a senior leader this year, I feel that I pushed and encouraged each of my teammates to get them to this point.”

Igo agreed, adding that has been a rewarding senior season.

“As a leader, I helped the younger girls find their role on the team.”

And because of that Igo can now say she has made it to the state tournament all four years of high school, a feat not many players in the history of Kentucky high schools sports can say they have accomplished.