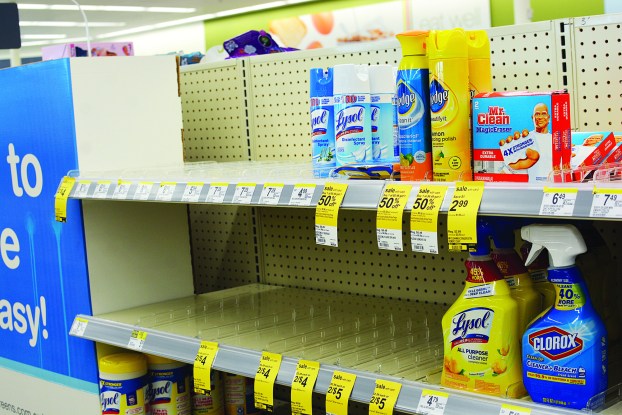 Pharmacies and groceries all over Winchester were running out of disinfectant sprays and wipes Tuesday because of fear of the coronvirus. (Photo by Randy Patrick)

Kelli Crosby looked dismayed as she stared at the shelves where the sanitary face masks had been, but they were all gone. So were the disposable gloves a few feet down the aisle.

“There are none anywhere,” she said.

Crosby was at the Walgreens at Colby Road and the Bypass, and said she had been all over Winchester and Richmond looking for the masks and was going to try Lexington.

There’s no hand sanitizer, no rubbing alcohol, no masks, no gloves, she said.

Coronavirus panic has resulted in a run on hygienic items that are normally easy to find.

At the CVS pharmacy, it was the same. No face masks. Bare shelves where the hand sanitizer had been.

The new Hometown Pharmacy on the Bypass had some bottles of rubbing alcohol, but little else.

Medical professionals have been saying that the disposable surgical masks are not that effective in keeping people who are not ill from getting a virus, but are more effective for sick people to keep them from coughing, sneezing or breathing on others.

Others say hand sanitizers aren’t the best way to clean your hands anyway. A pharmacist at Hometown Pharmacy said people who want to try to protect themselves from the virus should wash their hands often.

Harrison County schools were closed this week after three adults in that county were confirmed to have coronavirus, but as of Tuesday, it is the only school district that was shut down.

Schools remain open in Fayette and Jefferson counties, where there have also been cases confirmed, but none have involved children.

As of Tuesday morning, there were six confirmed cases in the state.

Clark County Schools Superintendent Paul Christy said it has not yet been determined what his school district would do if there were a confirmed case of the potentially-deadly virus in this community.

“If we have a confirmed case, we’ll work closely with the CDC and the Health Department,” he said, and will follow their recommendation on how to respond. “If that means shutting down, we’ll shut down,” he said.

That would be a decision of the Clark County Board of Education, not his administration, Christy mentioned.

The Centers for Disease Control and Prevention is the federal agency coordinating the national response to the COVID-19 outbreak in the U.S., and the Department of Public Health in Frankfort is taking the lead on the state’s response.

Christy and other Clark County School District officials took part in a discussion Monday with emergency service personnel, public officials, representatives of Clark Regional Medical Center and other participants, and they are planning an emergency response exercise sometime in the next several days, possibly next week, according to Emergency Management Director Gary Epperson.

“I think there was a little bit of panic” when Harrison County Schools closed, Christy said. “Since that time, we’ve learned a lot about the virus.”

“I’m not sure it has to mean closing the entire school system,” he said.

In the meantime, Christy said, the administration is having custodians come into every school twice a month on weekends to do “deep cleaning” in addition to the routine cleaning done on week days.

He said the custodians have chemicals to kill coronavirus, MRSA, influenza and other viruses on surfaces, and they are cleaning the walls from five feet down, as well as desktops, cafeteria tables, desks, restrooms, door handles and anything else children and adults might touch.

Whenever a school bus comes in from a run, it too is disinfected, he said.

The superintendent said Clark County Public Schools does not have nontraditional instruction days like some schools where students and teachers work from home via computer, but the district does have two or three days built into its calendar when it can close the schools without affecting the schedule. The board, however, would have to decide whether or not to use those.

“That’s something we’ll look at,” he said.

“We are monitoring it closely, and we’re doing everything we can to prevent it, but in case it does happen, we’re working closely” with the Centers for Disease Control and Prevention and the Department of Public Health and Clark County Health Department, and “we’ll do whatever we can to make it safe for our kids,” Christy said.

A Morehead man was jailed after crashing through four yards on Jameson Way in a pursuit with sheriff’s deputies. Dana... read more