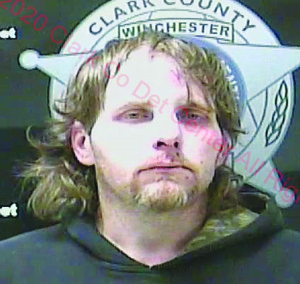 A Morehead man was jailed after crashing through four yards on Jameson Way in a pursuit with sheriff’s deputies.

Dana L. Fultz, 40, was arrested early Sunday morning following a pursuit from Kiddville Road into Powell County and back.

According to court documents, Clark County Sheriff’s Deputy Colton Lewis saw a vehicle stopping in several driveways along Kiddville Road. In the arrest citation, Lewis said there had been a number of thefts in the area and he started watching the vehicle.

After the third driveway, Lewis said the driver recognized the police vehicle and sped toward the Mountain Parkway.

The vehicle, he said, crossed the center line multiple times and was unable to stay in one lane. Lewis said he pursued the vehicle down the Mountain Parkway into Powell County. The suspect’s vehicle got off at the Clay City exit and then took Ky. 15 back to Clark County.

Officers had deployed spike strips at the intersection with Veterans Memorial Parkway. The suspect’s vehicle then turned into the Colonial Valley subdivision and crashed through four yards and fences on Jameson Way before it quit.

Fultz was arrested and charged with reckless driving, failure to use a turn signal, failure to wear seat belt, first-degree fleeing or evading police, first-degree criminal mischief, driving under the influence, failure to register transfer of motor vehicle, speeding and resisting arrest.

He was lodged in the Clark County Detention Center on a $1,000 cash bond.

A new program offers teen parents who want to continue their education a way to overcome some of their greatest... read more