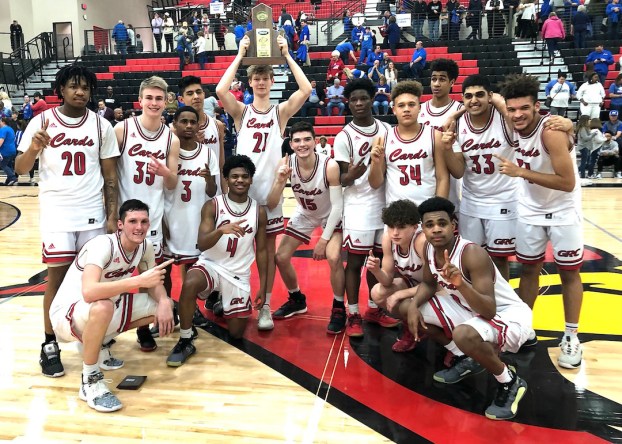 The Cardinals claimed their first 10th Region title in eight years and 10th overall with an exciting 53-50 triumph over Montgomery County Tuesday night at the GRC Arena. Clark advances to the Sweet Sixteen and will take on 1st Region winner McCracken County (30-5) at 8 p.m. on March 18 at Rupp Arena.

“It feels amazing,” Clark senior KJ Rucker said. “We grind (all year) and we worked really hard for this. It’s an amazing feeling. I don’t even have words, this is crazy.”

Clark (28-7) had little trouble advancing to the regional final with easy wins Augusta and Bishop Brossart in the first two rounds. The finale proved to be a hurdle in the fourth meeting with the Indians this season and the first 10th Region championship finale between the border rivals.

“We just found a way (to win) and kept playing hard,” Clark coach Josh Cook said. “At the end of the day, you’ve just got to keep making plays and hope the basketball falls your way.”

The Cards, hosting the three-day event for the first time since 1968, got the bounce this time around and gave the home crowd what they have been waiting for during the past 51 years.

A year ago, the Cards came up short in the region final, losing to two-time defending champion Campbell County. Montgomery County (22-13) disposed of the Camels with a 76-59 victory in the regional semifinals to set up a rematch of last week’s 40th District final.

Rucker said last year’s setback to Campbell County served as a motivation for the Clark.

“We made a promise that this year it wasn’t going to be the same result,” he said. “We knew we were going to make it. We just had to keep working for it.”

“We dreamed about it,” Clark senior Lincoln Bush added. “Last year we came up short, but this year it’s just amazing and amazing feeling.”

Montgomery County led 32-30 at the break and even stretched the margin to nine in the third quarter, but Clark rallied back to earn its first berth in the state tournament since making back-to-back appearances from 2011-12.

Jerone Morton paced the Cards with 16 points and nine rebounds. Rucker and Jared Wellman followed with 11 points apiece but it was Clark’s defense that was been the difference-maker in the postseason and came through again when it counted the most.

“Defensively we’ve been really good,” Cook said. “It’s about ‘D’ and you’ve got to get stops. Our pressure was really good and we’ve got good length. Our guys like playing that way and they like getting after it. I’m just so proud of them.”

Now, Cook and his players are looking forward to next week’s short trek to Rupp Arena.

“I’m excited for this school and this community,” said Cook, whose team went undefeated (9-0) in their new digs this season. “I had this kind of vision and dream since I’ve been here and get that job done. I’m thankful for the other guys who have been here the past couple of years and helped up set this vision to get this program where it needs to be. I’m tickled to death. I’m going to enjoy this.”

The Cards will get a seven-day break before stepping back on the court and have a simple goal in mind when they return to the hardwood.