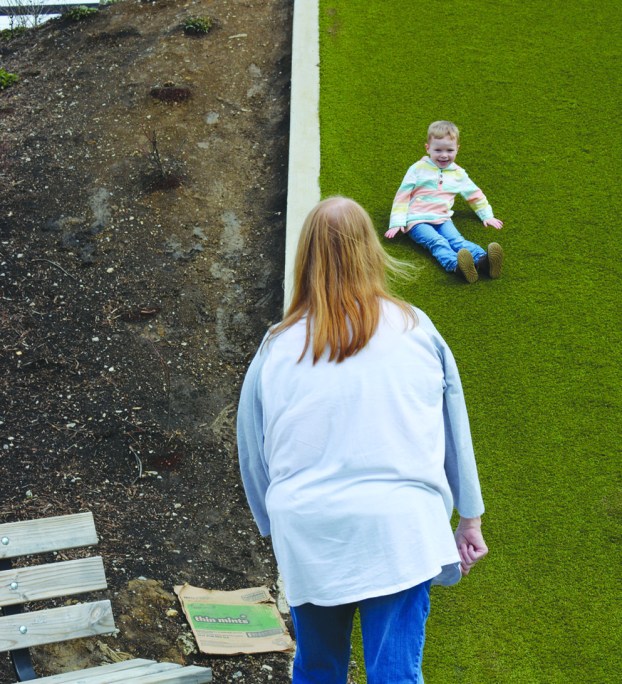 Robbie Milton watches her 3-year-old grandson Mayson come down the slide at the new Legacy Grove Park while standing amid other people's trash. A group plans to do a litter cleanup at the park Sunday. (Photo by Randy Patrick)

Mayson Milton laughed as he came sliding down an artificial turf slope at Legacy Grove while his grandmother waited for him at the bottom.

The cardboard boxes surrounding her on the playground where she stood, however, were no laughing matter.

Someone had left at least half a dozen Girl Scout cookie boxes lying around on the playground.

Other litter was also evident.

From 2 to 4 p.m. Sunday, a group of volunteers led by Winchester Inspired by Nature will work to clean up the new community park on Lexington Avenue on the site of the old hospital.

“There has been quite a litter problem there, so we really don’t know what to expect,” Peggy Moody, a member of the group, said.

Moody said according to some associated with Legacy Grove, people have had parties there and haven’t cleaned up after themselves.

There are trash bins nearby people can use to properly dispose of their trash, she mentioned.

The litter cleanup is the third this month for Winchester Inspired by Nature. The first was March 1 at College Park, and the second March 8 downtown, where volunteers found most of the litter they were collecting was discarded cigarette butts.

The group has done the physical work as part of the annual 10-week Wellness Challenge offered by the Clark County Activity Coalition, which ends March 18.

Winchester Inspired by Nature, which evolved from a Hardwood Institute workshop a few years ago, consists of Darron Arnett, Julie Kerber, Rebecca Campomanes and Moody. It partners with another new group, the Clark County Environmental Education Network.

Moody said Sunday’s cleanup is open to the public, and the group hopes many people will show up to help.

The Clark County Detention Center was one of the first jails in Kentucky to suspend inmate visitation because of concerns... read more