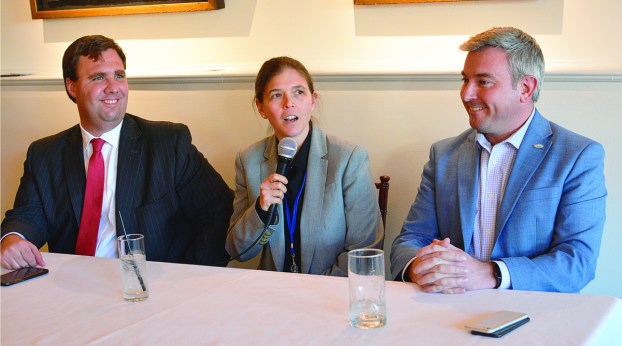 Civic engagement doesn’t have to mean running for elected office, but being a politician requires being all in —  all the time.

That was some of the advice three panelists — Agriculture Commissioner Ryan Quarles, District Judge Cole Adams Maier and former assistant county attorney John Hendricks gave an audience of 40 or so during a Winchester Young Professionals meeting Wednesday at Loma’s Gallery in the Winchester Opera House.

Quarles, of Georgetown, who was only 25 when he began his first campaign for the Kentucky House of Representatives, was one of the youngest state officials in the country at the time. Before that, he served two terms on the Kentucky Council on Postsecondary Education and held other appointed leadership positions in Frankfort and Washington, D.C.

“You don’t have to run for office to be influential,” Quarles said. In fact, some of the most influential policy makers aren’t elected leaders, “nor could they ever be elected to public office,” he said.

“If you do decide to run, be prepared. This is not a part-time thing. You have to put 100 percent of your effort into it,” he said, and you have to make sure your family is “on board.”

Hendricks, who ran unsuccessfully for state representative in 2016 as a Democrat, said if one does run for office, it’s not necessary to start so high. Being a school board member is an important and influential position, he said. Local issues play a big part in people’s lives. For example, Winchester and Clark County are currently deciding what kind of ambulance service to have, whether to contract with a private service or non-emergency transport, he said.

Maier said being in public service means having less of a private life.

One thing that surprised her, she said, was how “people are interested in having your attention.”

“It’s an honor that people will look to you for advice,” she said.

It’s also a burden, and one that an elected official should be ready to shoulder.

“Get comfortable with it,” she said.

“Social media is the devil,” and if you let it get to you, politics may not be for you, he said.

The other thing Hendricks found unpleasant about campaigning is the enormous amount of money one must raise. It’s hard to sit in a room full of people and ask them to give, he said.

Quarles said in his re-election campaign, he had to raise $1 million.

“Government is not a place to make a lot of money,” he said.

Lauren Mink Frazer, who served as moderator of the event, said members of the group were polled, and “civic engagement was the number one thing” they wanted to hear about.

One of the questions she asked was about what first attracted the three to public service. In all three cases, family tradition was a factor. Maier is the daughter of former judge Julia Adams.

Quarles’ father was a farmer and an advocate for farmers in Washington, D.C., and Frankfort, and his mother was a teacher, and Hendricks was the grandson of a sheriff, and a member of a politically-active family.

Maier decided to go to law school after graduating from Transylvania University and became a public defender and someone involved in issues of equity and justice for the indigent.

Hendricks said one issue that engaged him was learning about the time he thought about running that Clark County’s population growth was only about 1 percent.

“We as young people have an obligation to decide what kind of community we want, and what it needs to do to grow and thrive,” he said.

Quarles said in the U.S. there are 78 million millennials, a larger number than that of baby boomers, and his generation will be the one that will have to grapple with the big issues, including pensions, government debt and what the safety net will look like in the future.

Maier said “experience counts for something,” but that young people can have valuable experience and have significant influence.

“Being the youngest person in the room doesn’t mean you can’t be the most mature person,” she said.

Police arrested a Mount Sterling man after a woman passed a note to a store employee saying she was afraid... read more