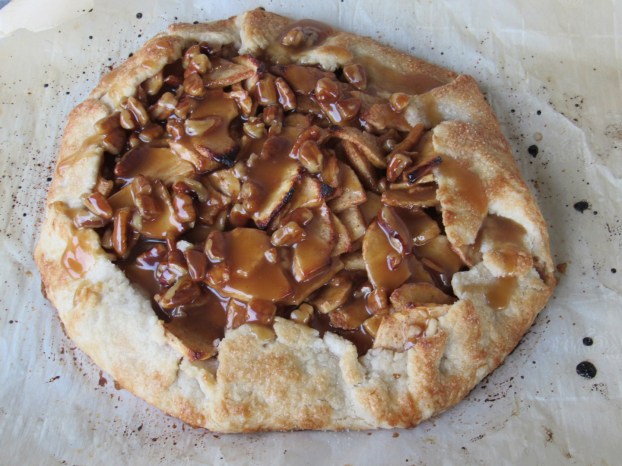 CONDLEY: After a couple failures, delicious dessert comes to rescue

My weakness is sweets. I would give up food for dessert. There are times I wish I’d ordered dessert at a restaurant instead of a meal; but I don’t think I’ve ever done it. One day I will.

I had apples in the refrigerator, and they were calling me to do something with them.

It didn’t take long to find today’s recipe in my stack of things to try some day. It came from Pillsbury.com.

Bake 25 to 30 minutes or until crust is golden brown and apples are tender, covering with foil last 10 minutes if necessary, to prevent excessive browning.

I had all of the ingredients and it sounded pretty simple to make. Lately, I’ve been in the mood for quick and easy when it comes to cooking.

I make my own pie crust and it’s so simple that I wasn’t about to buy pie crust, though there is nothing wrong with the refrigerated kind.

After putting the pie crust together, I rolled it out on parchment paper instead of placing it directly on a cookie sheet. I figured if the juice from the pie leaked out, it would make clean up easier if the pie was on parchment.

I mixed the sugar, cornstarch and cinnamon in a large bowl then started peeling the apples.

Thank goodness I have an apple peeler, corer and slicer. In no time the apples were in the bowl and I was tossing them to get them coated with the sugar mixture. I heaped them onto the crust and folded the edges up over the filling.

The crust only comes up around the filling, it doesn’t encase it. I’m not decorative, so mine didn’t look pretty.

I placed the pie into the oven and began putting the caramel sauce together.

I melted the butter then stirred in the brown sugar and corn syrup. It boiled gently for a couple of minutes then I added the pecans, let it come to a boil again, then removed it from the heat.

At this point, the kitchen smelled wonderful from both the pie baking and the sauce cooking. I stirred in the cream and vanilla and set it aside to cool.

The pie came out of the oven after 30 minutes. The recipe mentioned covering it if it began to get too brown, but that wasn’t an issue for me.

After our meal that evening (you remember the not so good one from last week?) I was sure ready for dessert.

I poured some of the sauce over the pie, but since Brad isn’t crazy about really sweet stuff, I left about half of the sauce in the pan.

We each had a slice. I drizzled more sauce on top of mine.

We both liked this dessert.

I’d used a mixture of apples so it wasn’t overly sweet. It was just right.

The sauce was so good I could have just eaten it straight out of the pan.

This dessert was so good I called our neighbors to see if they would like to have some. Really it was so I wouldn’t eat the entire pie. They agreed, and the next day they let me know they really enjoyed it. Rachel said it just may be her favorite of all the pies they’ve taste tested for me. Like me, Rachel said she loved the caramel-pecan sauce on top.

You can bet this is a nailed it recipe, and it’s got a place in my self-made cookbook and the sauce will have its own special place in my cookbook, too.

Nailed It or Failed It: One Skillet Chicken with Lemon Garlic Cream Sauce