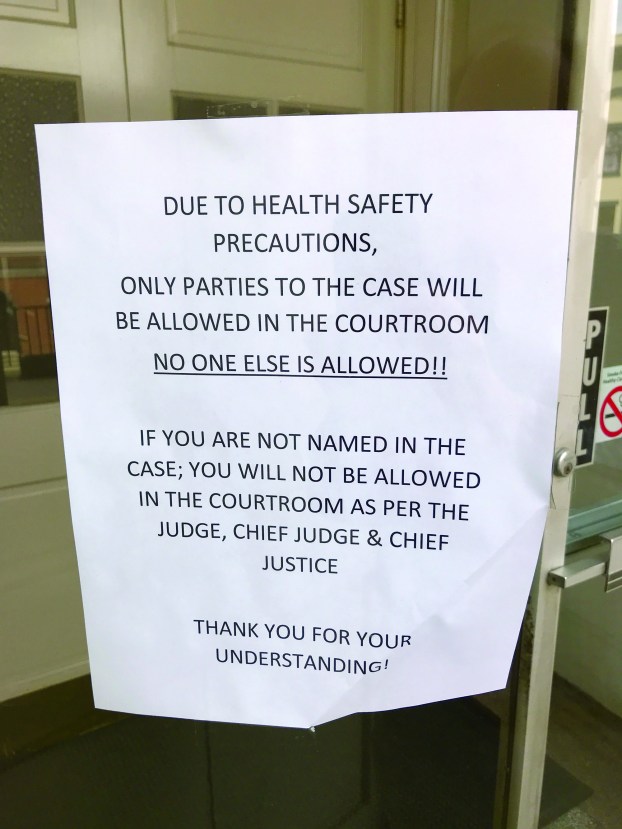 This sign was posted on all doors at the Clark County Courthouse and the judicial annex Thursday as circuit and family courts were in session. (Photo by Fred Petke)

As public concern about the spread of COVID-19 continues to spread, the Kentucky court system became the latest agency to limit access.

In an order issued Friday by the Kentucky Supreme Court, practically all in-person court proceedings were canceled through April 10. The order listed exceptions for emergency matters, domestic violence hearings and criminal evidentiary hearings. Civil matters will all be rescheduled, and “reasonable attempts” will be made for criminal trials.

Those allowed to appear in court will be limited to the attorneys, parties in the case and necessary witnesses.

Clark Circuit Clerk Martha Miller said her office will be open as usual, as court business will continue.

“Things will be filed electronically,” she said. “We will still do our jail docket by video.”

Hearings with specific time limits, such as preliminary hearings in criminal cases, will be at the judge’s discretion, she said.

Friday has been an extraordinarily busy day, she said, as the news spread.

“Our phone calls have been overwhelming,” she said.

The clerks are also in the processes of mailing notices to parties in cases that have been postponed.

The Supreme Court also ordered those currently on jury duty may see their term extended. Judges were also ordered to summonses in place of bench warrants, ordering them to appear in court at a later date rather than be arrested.

Sending notices, though, depends on the clerks having people’s correct mailing addresses. Miller said people can call her office to verify their correct address is on file.

“We’re working diligently to get the notices out,” she said.

COVID-19 has become the topic of discussion in Frankfort and Washington, D.C., this past week. The concern of rapid spread... read more