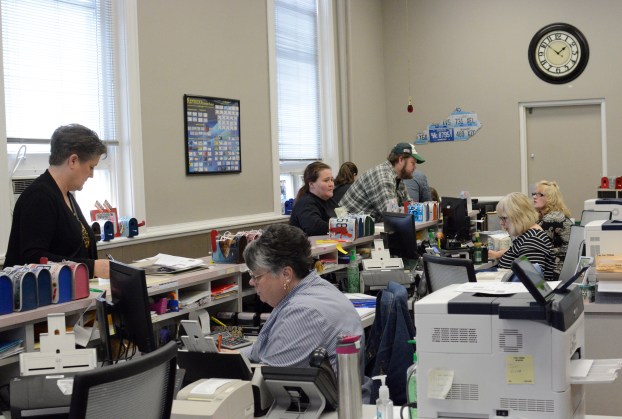 The Clark County Clerk's Office is closing to the public during its busiest time of the year because of the coronavirus. The closure will be until further notice.

Courthouse offices to be closed to public

The doors to the Clark County Courthouse will remain open unless and until the Administrative Office of the Courts decides otherwise, but beginning Tuesday, the offices that handle most of the courthouse business will be closed to the public.

County Clerk Michelle Turner said Monday that as of 5 p.m. that day, her office would be closed to the public until further notice because of the threat of the novel coronavirus.

“We will be here to answer the phones, they can do mail-ins and they can pay over the phone with their credit cards,” she said. “We can’t do a car transfer over the phone, but we can do renewals, pay taxes.”

Clients can also do some of their work online.

They can go drive.ky.gov to pay their car taxes, or to www.ecclix.com for land records.The vendor is waiving its fees for now, Turner said.

However, only land records back to 1998 are included in the online records.

Voters can register at govoteky.com, or they can request that the clerk’s office mail them a form. The deadline for new registrations is April 20 unless the state extends it.

“It’s just taken everybody for a loop,” Turner said of the precautions being taken for the virus which causes the illness COVID-19. “And this is March, our busiest month.”

Property Valuation Administrator Jason Neely said his office would be closing down at 4 p.m. Monday until further notice, but his staff would still be in to handle work by phone.

County Judge-Executive Chris Pace said his staff would there to work on payroll and other time-sensitive work, but they won’t be receiving visitors.

Pace said he can’t close the courthouse doors because the state has to be able to hold circuit court upstairs, but last week the Kentucky Supreme Court issued an order severely limiting when court is in session, and in many cases, only lawyers, judges and clients can be present.

“We have not had those discussions yet” about closing the building on the courthouse square to the public, he said. “There are still people coming into the building that need different things.”

Gov. Andy Beshear has asked that public meetings be limited to no more than 50 people and discouraged nonessential meetings.

Pace said the Clark County Fiscal Court would have a meeting at 10 a.m. Tuesday, and said people have a legal right to attend, but he would rather they stay away unless they have to be there.

Burtner said the same thing about a Winchester Board of Commissioners meeting scheduled for 5:30 Tuesday.

“We are urging people who don’t have an absolute necessity to be at the meeting to not come,” he said.

On Sunday, the first case of the illness was confirmed in Clark County. The person, a 49-year-old man, was not in a hospital, but had self-isolated.

Later that day Pace declared a county-wide state of emergency, which is necessary for the county to be able to qualify for federal funds to recoup money it spends on responding to the coronavirus and authorize further action if necessary.

Pace said sheriff’s deputies, firefighters and other first responders will be avoiding contact with the public as much as possible.

“We’re going to limit any hand-to-hand and face-to-face contact wherever possible,” he said.

On Monday, Pace and Clark County Public Health Director Becky Kissick met with the governor in Frankfort and were present during his press conference.

The governor reported that as of that morning, there were 21 confirmed cases of the virus in Kentucky, including that of a Bourbon County resident who died over the weekend — the first death from COVID-19 in the commonwealth.

While many services like schools and senior centers close because of the coronavirus, many on the frontline are still working... read more