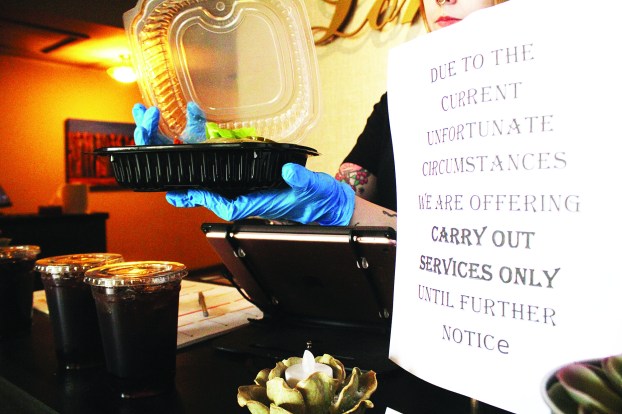 Megan Sum, manager of Loma’s at the Opera House, prepares a to-go meal for a customer at the restaurant. After Gov. Andy Beshear ordered all restaurants and bars to close their dining rooms Monday, most have turned to to-go services only. (Photo by Whitney Leggett)

Restaurants are facing significant challenges as a result of an order issued by Gov. Andy Beshear Monday closing dining rooms to customers and allowing only drive-through, delivery and carryout service.

La Trattoria Italian Tavern had only recently opened when the governor’s order changed how they must now do business.

Janet Roccanova, one of the owners, said it was fortunate they had just implemented a delivery service a few days before the decision, and they’re hoping to ramp that up.

“We have a pretty loyal customer base,” she said, and that helps.

The restaurant is doing deliveries within a 3-mile area, and also curbside pickup during its regular hours.

She said some of the employees are concerned about their jobs.

Employees are also a concern for Vanessa Ziembroski, owner of Loma’s and the Winchester Opera House. Her front-of-the-house staff, including waiters and waitresses, are going to be affected most.

Currently, Loma’s is only doing carryout and curbside service.

“We are looking at the need for delivery services so that we can give some of our house staff the opportunity to make deliveries and to garner tips associated with those deliveries,” she said.

She said she would rather pay her own people to do those deliveries than another party such as Grubhub.

Ziembroski said she’s hoping the restaurant can get a small business loan, draw on reserves and possibly get grant money, which might enable her to pay people what she was paying them.

“Yesterday was terrible. Today is improved,” she said Tuesday.

She said the Chamber of Commerce is doing a good job of getting the message out on social media to support the restaurants.

Kenny Allen, who owns In & Out BBQ on Main Street and is also a pastor, has no employees. He does all the work, and he’s been able to maintain his daily quota with carryout service only.

“It really doesn’t slow me down,” he said early Tuesday afternoon. “I’m getting ready to do about seven of them.”

He said he has even been able to keep his prices as low as they were before the governor issued the order.

But he knows the order will hurt other restaurants, and also knows it can’t be helped.

“It’s not what I want, it’s what the governor wants,” he said, adding that “it should be the law.”

Ryan Dotson, owner of the Steak ’n Shake on Lexington Avenue, a fast-food franchise, said his business is almost entirely drive-through now, although the store is doing some large-order deliveries.

“It’s really been tough,” he said. “We’re trying to make some modifications. We’re doing a select menu so we can push people through the drive-through a lot quicker.”

Dotson said his dining room servers made a large part of their income through tips, and he’s had to do some temporary layoffs to be able to manage his labor costs. He knows he’s going to lose some of them and regrets it.

The ripple effect, he said, is that when restaurants like his are able to reopen as normal, they will have lost many of their employees and will have to go through a long hiring and training process.

“It’ll be almost like opening a restaurant again,” he said.

Dotson said he is looking at offering a carhop service, similar to Sonic’s, at another franchise location, and if it works there, offering it in Winchester as well.

“We want to stay open as long as we have business,” he said.

Well it turned out we all had to stay home. First time in my house that I wasn’t alone. So... read more