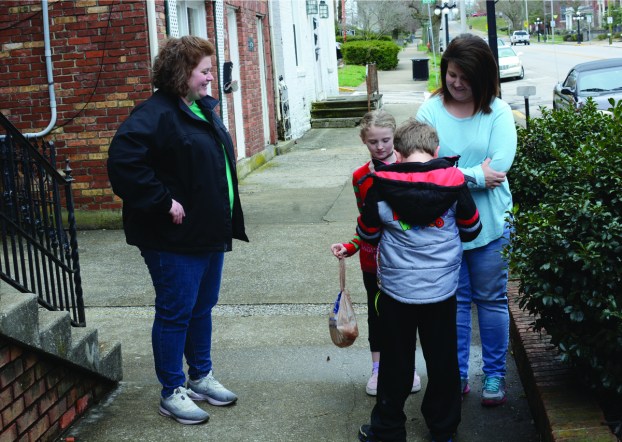 Lara Thornberry hands out food to children at First Baptist Church's fellowship hall on South Main Street Wednesday. The church gives out about 120 meals a week through its Feed My Sheep program. (Photo by Randy Patrick)

In the Gospel of John, Jesus asks Simon Peter if he loves him, then tells him: “Feed my sheep.”

First Baptist Church on Lexington Avenue is taking that command literally, handing out bags of food to children, the elderly and others Wednesday around noon.

The church has let it be known that during a time when life as usual has nearly come to a standstill for many people, the church is here to help.

“We recognize that this is a moment of crisis in our nation, and we want to be as responsible as we can; however, we also want to be the brightest light that we can, because in the coming days, we will see both the ugliness of humanity” and humanity’s goodness, Pastor Tony Stang said. “We are called to be a light in our city, and this is one of the ways we can be the church, by serving … the people downtown.”

“We want to reach people in a godly way,” he said.

Lara Thornberry, who led the effort to distribute food at the front doors of the fellowship hall, said First Baptist’s Feed My Sheep program provides about 120 sack lunches, mostly for children, each week.

“We’re just concerned about the kids,” she said. “I know the school system is giving out breakfast and lunch, but I still think there might be a need in the evening. These are nonperishable food packets that kids can eat later in the day.

“We were fortunate that we were able to go out and stock up on supplies, but other people don’t have that option, so we thought it would be a great way to help,” she said.

Ark of Mercy Church of God has provided daily hot meals in its dining hall for many years, and also provided boxes of nonperishable food to some of its members and others.

Since the coronavirus came to Kentucky, the church has stopped giving out boxes because the food is needed for meals.

Pastor Janice Claypoole said the church provides about 200 meals a day at the church and delivers about 100 in the community.

“When people come to the door, we can give it to them,” she said.

She said she doesn’t know whether Gov. Andy Beshear’s order forbidding consumption of food and beverages in restaurants and bars applies to churches.

Some have been eating in the church, she said.

Claypoole said she doesn’t know how many to expect, but she thinks it will grow. Buying to-go food boxes for the meals has already been an additional expense, she added.

But that has changed.

Grace Bible Pastor Lee Cruse said his church members had gone from providing hot meals at the church to handing out sack lunches with gloved hands, but it was decided the risk from the virus was too great, so they are “discontinuing everything.”

“I feel we have no choice in the matter. It kills me, because we have a lot of people that eat with us on a regular basis. I don’t know what to do,” he said.

First United Methodist Church is providing meals for children already in one of its programs. For seven years, kids have been coming to the church Thursday nights for Bible study and a free meal. While that is no longer happening on church property, members are taking Bible study materials and bagged meals to those same kids at home.

It’s a way to “be the church” to the children, she said.

How to talk to children about COVID-19

As the county buckles down and addresses the concerns amid the spread of the coronavirus (COVID-19), businesses and schools are... read more