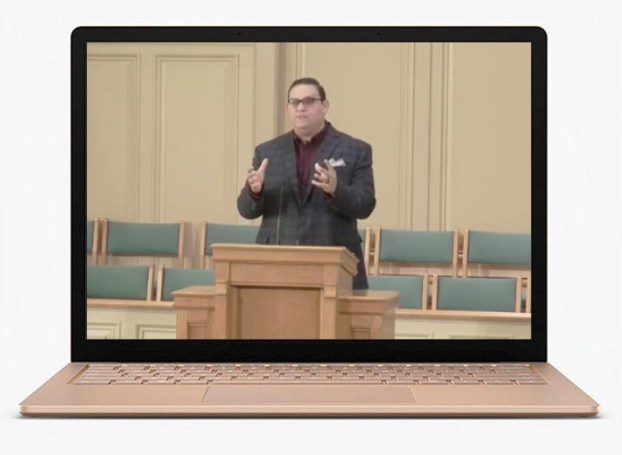 Tony Stang, pastor at First Baptist Church on Lexington Ave., gives a sermon Sunday, March 22, to an empty church. Congregants and others tuned in to the sermon via a Facebook Live stream. Many churches in town have turned to alternate methods of getting their messages out as the governor has asked churches not to have in-person services amid the coronavirus outbreak. (Graphic by Whitney Leggett)

Christian worship involves believers coming together for fellowship and worship, to break bread, share the sacramental cup, pray together and share one another’s joys and burdens. How does a congregation do that in a time of pandemic when being physically present with others can be perilous?

Some local pastors are learning innovative ways to be the church.

“A lot of pastors have had to learn Facebook in the last several days,” Pastor Tony Stang of First Baptist on Lexington Avenue said.

The historic downtown church has been sharing and recording its worship services with only the clergy and worship leaders present, as many local churches have been doing since Gov. Andy Beshear asked that congregations not gather for worship services and risk spreading the debilitating and sometimes deadly coronavirus.

Stang said his church is also doing “virtual counseling hours” on Tuesdays and Thursdays, and has recruited members to “go out and shepherd” members of the flock who are shut in.

Stang said in a time of uncertainty and fear, he has gotten prayer requests that have surprised him.

“People I would have never expected have called in, and we’re walking with them through this journey because people are all over the emotional map as they should be because nobody knows how to process this. This is unprecedented,” he said.

It is also a time when people are grappling with the big questions about faith, spirituality and eternity.

“Our world has been shaken, and a lot of people are stopping to think, ‘Where do I stand spiritually? What is next for me after this life? Is this all there is?’” he said.

Pastor Lee Cruse of Grace Bible Church wasn’t even sure what a podcast was, but now he’s doing one every day. He started Monday.

“We’re just talking to our congregation and trying to keep them informed and encouraging them,” he said of the daily talks.

They’re also reaching out through email and have started doing church services through Facebook Live.

The church still has to pay their expenses, so it is using PayPal as a way for members to contribute their tithes and offerings, because passing the plate is no longer an option.

One thing Cruse regrets is the church felt it temporarily had to suspend its food program during the pandemic to protect volunteers from exposure to the virus.

He said they were providing dinner to about 6,000 people a year and distributing boxes of canned goods and other food to about 400 to 500 people, but now they aren’t providing that. They tried to do sack lunches for a while, but thought even that was too much risk.

The church sought advice from the Clark County Health Department, but were told that having people congregate at the church to receive meals could present a problem.

“But I’ve had a lot of people in our congregation call me and say, ‘If you know of somebody who needs this and that, let me know and I will deliver them to them or go pick them up. And I appreciate that. We’re just trying to stay in touch with everybody as much as we can until this thing is over and that’s all we can do,” Cruse said.

Cruse said the church has been blessed that none of its members has had the virus as far as they know, but there is a flight nurse who is a member who was in contact with the first patient in Kentucky, who was transported to the University of Kentucky Hospital. The nurse has shown no symptoms of being ill.

Steven Moore is a young pastor of a small country church with a mostly older congregation, Forest Grove Christian. Most of the members are not technologically savvy because the digital world hasn’t been a big part of their life experience, but they are adapting.

“Two weeks ago, we canceled altogether. We really didn’t have a plan,” he said. But then the elders got together and decided to livestream church services on Facebook, and a deacon and an elder also recorded the service to be broadcast on local cable television channel 378 on Tuesdays and Thursdays at 3 p.m. and Fridays at 8 p.m.

Online and televised worship services are nothing new for megachurches like Southland Christian, but they are an innovation for little, traditional churches like Forest Grove.

The leaders have also relied on old technology, including landline telephones and answering machines to reach out to members.

“For as long as this thing may go on for, we just want to make sure everybody’s OK and they’ve got what they need. It’s just good to check in with them weekly, especially with us having a more aged congregation, you just never know when they may need some help,” he said.

Moore said his church members “trust in God, but also they understand the realistic dangers” of the pandemic and are relying on reason as well as faith.

It is a new challenge that church leaders are going to have to meet to stay relevant and serve God’s people in a difficult time, the three pastors agree.

Stang suggested this is going to be the new normal for the foreseeable future.

“As much as this has been overwhelming for this moment, we’ve got to look at what does this look like for ministry three to six weeks from now and beyond. We have to try to look beyond the horizon as best we can,” he said.

One of the fringe benefits of the coronavirus-related restrictions, recommendations and closings is police are seeing much lighter traffic and... read more