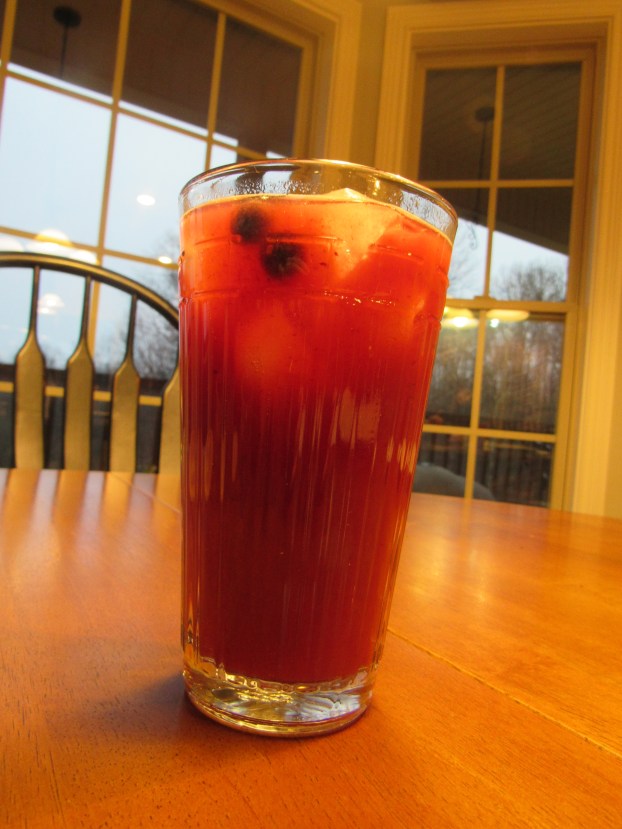 The first one was torn from a magazine and down in the corner the only reference is mymagazine.us. The second is from a Kohl’s add that was in the December 2019 issue of “Food Network Magazine.”

In a small nonstick saucepan, heat berries, sugar and water over medium-low heat, just until berries burst and liquid gets syrupy, two to four minutes.

Let berry mixture cool slightly; add it to food processor or blender, and puree. Strain into bowl or large measuring cup and chill (this will make one cup puree).

Combined chilled puree and lemonade. Serve over ice, garnishing with mint and fresh berries, if desired. Refrigerate any leftovers.

Heat 1 quart half-and-half and one teaspoon ground cardamom in a medium saucepan until steaming, about eight minutes (do not simmer). Stir in eight ounces chopped white chocolate until melted. Pour into four mugs and top with mini marshmallows and more cardamom.

I love lemonade, not just in the summer.

I ended up with a heap of blackberries, blueberries and raspberries that were left over from a function I attended (before coronavirus) and I sure wasn’t going to let them go to waste.

At first, I thought I’d use them in a sweet dessert, probably a pie or cobbler. Then I thought, “I don’t need to make something sweet because I’ll just eat, and I eat enough sweets.”

So I began my search for another way to use the berries by looking through my stash of recipes until I found this Simple Berry Lemonade recipe.

I placed the berries and sugar in a small sauce pan (mine wasn’t nonstick and it worked fine), and added the water.

I heated the berries for much longer than four minutes. Maybe I had the heat too low, but I’m not sure the berries ever burst. I just let them simmer until they were syrupy.

I poured the fruity syrup into my blender and let it go a few seconds.

Then I poured the liquid into a strainer. I had to use a spoon to force all the liquid through the strainer and into a measuring cup.

When I finished straining the puree, I ended up with about a cup and a half of berry sauce.

I covered the measuring cup and put it in the refrigerator.

The next day, I mixed up two quarts of Country Time lemonade. I poured in the berry sauce and stirred.

I added ice to a glass then poured in the lemonade to have with our evening meal.

This twist on lemonade is a winner. It was so refreshing and I enjoyed every last drop over the next few days.

I won’t hesitate making it again when I’ve got berries to use.

Now, on to the Cardamom White Hot Chocolate recipe.

On a cold day, it’s always nice to have something warm to drink. Since I don’t care for chocolate, regular ol’ hot chocolate is out of the question for me.

But I do like some white hot chocolate. I’ve tried it from vendors out in the community. Some I like and some aren’t that great. I’ve made Paula Deen’s white hot chocolate, and it’s good, but this one had a twist, it included cardamom.

I wasn’t sure I’d like this recipe, but I was willing to try.

I didn’t have half-and-half so I had to wait until I went to the grocery; everything else was in my cabinet.

I chopped up eight ounces of white chocolate and then poured the half-and-half into a medium saucepan. I added the cardamom, and turned the stove on low.

When the mixture was steaming, I dumped in the chunks of white chocolate and began to stir.

They melted in no time and I was ready to ladle it into my mug. You guessed it; Brad doesn’t drink white hot chocolate because it’s too sweet for him.

Just one sip and I knew. Oh, my goodness — delicious. This white hot chocolate recipe is now my favorite warm drink and definitely a nailed it in my book.

Not sure I’ll mind cooler days now because I can warm up with my hands wrapped around this mug of deliciousness.

Oh, there’s no photo of this recipe. I don’t care for marshmallows, so the photo would not have been that interesting, and it was so good it wasn’t around long enough.

With the crazy weather we are having, either one of these beverages just might be the thing for you to try during your time at home right now.

CONDLEY: After a couple failures, delicious dessert comes to rescue

My weakness is sweets. I would give up food for dessert. There are times I wish I’d ordered dessert at... read more