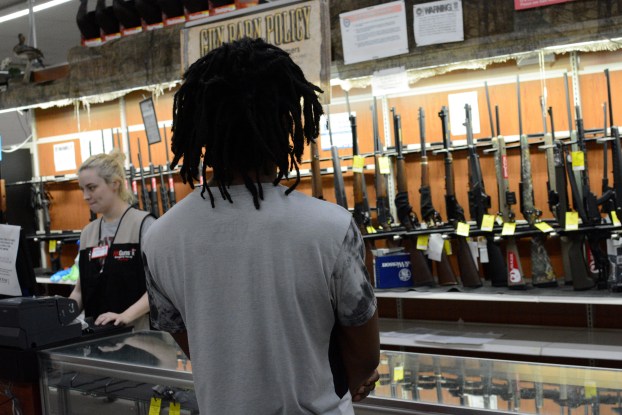 A recorded message informs the giant retailer’s customers that until further notice, service staff will only communicate via live chat from its web page because their time is better spent processing existing orders.

At Kentucky Gun Co. in Bardstown, owner Patrick Hayden told the Courier-Journal last month that his sales were up 700 percent, surpassing spikes seen during the last decade when gun owners were fearful of possible regulations.

The Federal Bureau of Investigation reports a 36 percent increase in firearms background checks for February compared to February 2019.

While many people are stocking up on nonperishable foods, hand sanitizer and toilet paper because of the coronavirus pandemic, others are buying guns and ammunition.

Winchester doesn’t have a big gun shop, but stores that sell a variety of products considered “life-sustaining,” and are allowed to remain open under the governor’s executive orders, are doing a brisk business selling guns and ammo.

At Rural King one day last week, most of the shelves that held long guns were bare. There were about 35 to 40 rifles and several handguns, but only two shotguns left, according to Jamika Baker, the sales clerk who was waiting on a customer who had a stack of boxes of ammunition.

James Rushing, the general manager, said the store had sold out of most of its stock of firearms and ammunition but was replenishing it as quickly as it could. The company had put out a message to customers that it was ceasing online sales of ammunition, effective immediately, until further notice so that it would have enough to supply its 119 stores.

Rushing, who was a manager for Walmart for 20 years before coming to Rural King, said he’s seen panic buying of ammunition and guns before.

“For some folks, it’s a natural response to an event. ‘What do I do?’ It’s the unknown” that worries them, he said.

Many people are working from home and are there all day, or they’re out of work and think they need to stock up on supplies to sustain them until they get another paycheck. And for some of them, “their stock of choice happens to be ammunition and firearms,” he said.

At Winchester’s Walmart, manager Shannon Willoughby said it’s “business as usual for us.”

“We don’t carry a whole lot of guns,” she said.

Walmart stopped selling some kinds of weapons in response to mass shootings. They have no handguns, and mostly shotguns, hunting rifles and muzzle loaders.

Michael Markuszewski of Tactical Gear Junkie on Rockwell Road in Clark County, said his business isn’t, “strictly speaking, a gun store.” but because people assume they are, they have been flooded with phone calls from people wanting to buy weapons and ammunition.

The business has a federal firearms license, so it can sell guns, but it doesn’t stock them or ammunition. It does a lot of firearms transfers, however, for its customers. They can order them online, have them sent to his business, and he does the transfers.

“We’ve definitely seen an unprecedented demand for guns and ammunition,” Markuszewski said. “There are constant calls about it.”

“The truth of the matter is that you can’t find ammunition for a lot of popular firearms,” such as .556 and .223 for AR-15 rifles and 9 mm for semiautomatic pistols. “It’ all pretty much gone everywhere, including online,” he said. “Whenever it does come up for a reasonable price, it’s gone within minutes or hours at the most.”

Markuszewski said that with so many people out of work, an increase in home break-ins is “a realistic threat.”

“It’s like, ‘Now I’ve got to protect what’s mine in case lawlessness erupts in the streets,’” he said. “But there’s also a more extreme version of it — people who stock up for what they see as the end of the world. They think it’s all going to crash down, and they want to be more prepared than the next guy.”

Many people, he said, are “letting their emotions get to them,” and so are “thinking of the worst-case scenario,” but while it’s unlikely things will get as bad as the “preppers” or survivalists always expected, “what they were doing all this time sort of makes sense when you see all the shortages at grocery stores.”

“Maybe they had a point,” Markuszewski said.

Winchester Police Patrolman Kelly Webster wanted to be a K9 officer, but wasn’t sure if the opportunity would present itself.... read more