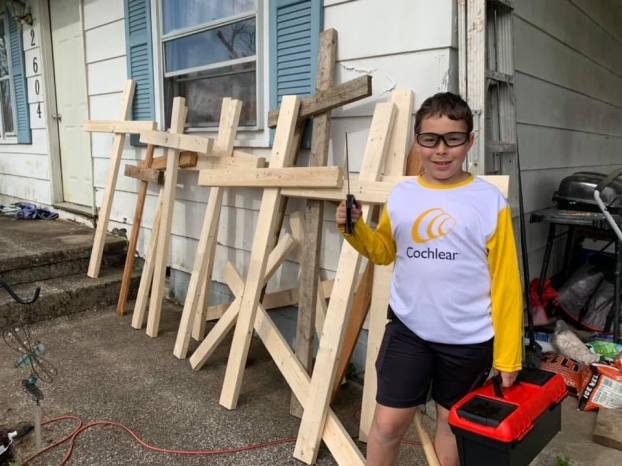 Marley Toews’ favorite Bible verse comes from 1 John 3:18, “Dear children, let us not love with words or speech but with actions and in truth.”

The local 11-year-old is living that verse out these days as he’s been building crosses as a symbol of his faith and hope.

“I want people to know that even when things look bad, God is still good, and he’ll take care of us,” Marley, a fifth grader at Baker Intermediate School, said.

While he’s been home from school because of the coronavirus outbreak, Marley has built more than two dozen crosses that will soon be installed in the front yards of homes all throughout the community.

“So far, I’ve built about 25,” he said in a phone interview Tuesday morning.

He built at least 20 Monday, he said.

His mom said as of noon Tuesday, Marley has a list of at least 58 others wanting one of his hand-made crosses for their yards.

Marley at first built the crosses using scrap wood from around his family’s home with the help of his dad, Tim Toews, and his grandpas, he said.

He eventually ran out of the scrap wood, so he had to purchase more, and now he knows how to construct the simple wooden crosses on his own.

Marley’s mission started when his mom, Jess Toews, wanted a cross for their own front yard, an idea she picked up from others in the community who were installing crosses decorated with Christmas lights to send a message of hope in a difficult time.

He uses wooden two-by-fours, which he has been buying with donations toward his project.

“I will probably need more donations to be able to build all the crosses people want,” he said.

Marley said he enjoys making the crosses. It helps him get out of the house during the school shutdown and it makes his “heart feel happy.”

“I even put them in for people,” he said about his extra measures to install the crosses for some people.

He writes a verse, usually John 3:16, on this crosses. Some have “Jesus Loves You,” written on them.

He also encourages people to decorate their crosses with lights, a symbol of light in a dark a time, he said.

Marley’s mom made him a Facebook page, Marley’s Crosses, where people can post photos of their crosses and also request a cross of their own.

Marley’s crosses are being delivered as far as Louisa, Kentucky, according to the Facebook page.

Marley said his mission is two-fold.

“I want people to know that Kentucky can get through this,” Marley said. “I also want to show Jesus to people.”