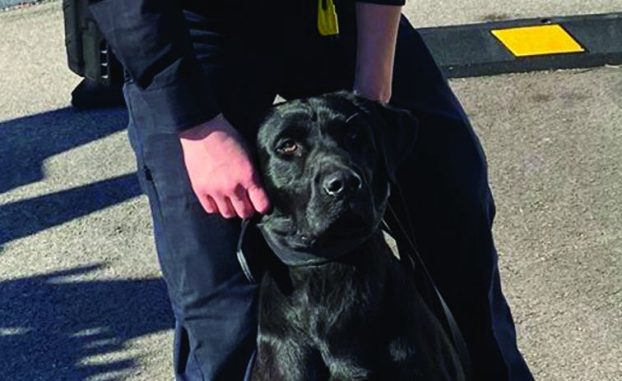 Winchester Police Patrolman Kelly Webster wanted to be a K9 officer, but wasn’t sure if the opportunity would present itself.

A few weeks ago, the department decided to add a K9 unit to its ranks and was looking for a handler.

“Chief (Kevin Palmer) asked me if I was interested and I said, ‘yes,’” Webster, a three-year veteran of the department, said. “… I wanted to be a K9 handler. I had no idea we’d get one.”

Crockett, a black Labrador retriever, took his first shift Monday riding with Webster. The pair had trained together for several weeks at Bluegrass K9 in Raceland with other officers and K9s, she said.

Crockett, who is almost 2 years old, is trained as a search dog for people and narcotics, she said.

“We hid drugs in pretty much everything: cars, trailers, boxes, buildings,” she said. “They had a house that was abandoned (and used for training). They wanted the dogs to get used to other environments and scents.”

Tracking humans involved one of the other handlers making a trail and hiding, leaving another K9 and handler to follow the scent.

“We just put the dog on the scent and let the dog do its thing,” she said.

Winchester Police Capt. Harvey Craycraft said the department hasn’t had a K9 unit for about five years, when the previous K9 and handler retired. There were several requests and donations from the community to the department specifically to add a K9. Between the dogs, training and supplies, the department invested about $8,000 in Crockett.

“We were lucky in that regard,” he said. “Most of that came from donations and forfeiture funds.”

Being a K9 handler is a 24/7 commitment. Crockett will live with Webster. Any time Crockett is needed, Webster gets called out too, she said.

Still, Webster is beyond thrilled with the new duties.

“I don’t think I could put it into words,” she said. “I’m pretty happy with it. I liked coming to work before, but now it’s so much better.”

The Winchester Sun has partnered with Clark County Child Development Center to bring a daily reading of a children’s story.... read more