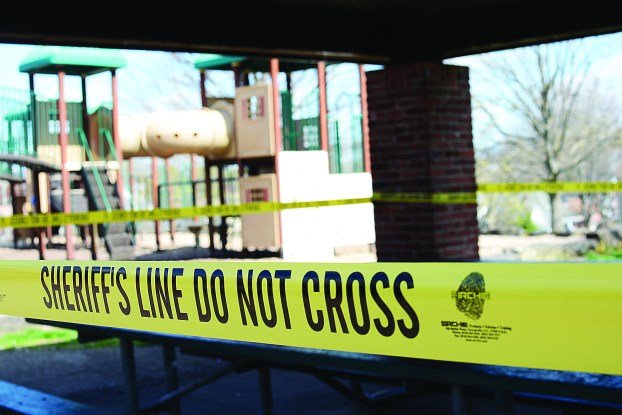 Yellow police tape from the Sheriff's Office is used to bar entry to the picnic area at College Park. The playground in the background, the basketball and tennis courts and all other facilities except the walking trails are also off limits. (Photos by Randy Patrick)

The community’s parks remain open for walking and enjoying the fresh air, but all the amenities — children’s playgrounds, picnic tables, basketball courts, soccer fields and restrooms — are closed to prevent the spread of the coronavirus.

Community leaders agreed to the voluntary closures during an online meeting Thursday morning.

Winchester Mayor Ed Burtner made the suggestion after having visited 15 to 20 public and private parks in recent days to observe activities.

What he found, he said, was that most people who are walking at places such as Legacy Grove or city parks are practicing social distancing, but others are not, playing contact sports such as basketball or soccer or gathering around dining tables.

“I think it’s a time to comply with the governor’s requests and his instructions, and that’s what we’re trying to do,” Burtner said.

On Thursday, he was visiting a park on West Washington Street to monitor compliance.

“At least for the time being,” Burtner said, he and other leaders want to “allow at least some green space where people can get out and walk and take in the sunshine,” but they may not be able to continue even that if people don’t make an effort to stay an appropriate distance from one another.

Burtner said he discussed the situation with Parks and Recreation Director Jeff Lewis, County Judge-Executive Chris Pace, Superintendent Paul Christy of Clark County Public Schools and others, who were all in agreement.

Gov. Andy Beshear and the Kentucky League of Cities have also made those recommendations, Burtner said.

At this point, Burtner said, he is not issuing an executive order, but if necessary, either he or Pace could do so, or more likely issue a joint order. Initially, however, they are letting the organizations that own the parks enforce the rules on their own.

Jen Algire, president and chief executive officer of The Greater Clark Foundation, said the parks are being monitored, and in some cases, gates will be locked or facilities will be designated as off limits by yellow police tape. Some already have been.

Wayne McNiel of the Association of Churches offered to notify churches by email to also close off their playgrounds and picnic tables to their own members and the public.

The decision was made effective immediately on Thursday.

“This is not an easy decision,” Algire said, but one that is best for public health.

Clark COVID-19 cases on the rise

Two additional cases of the novel coronavirus (COVID-19) have been confirmed in Clark County, according to the Clark County Health... read more