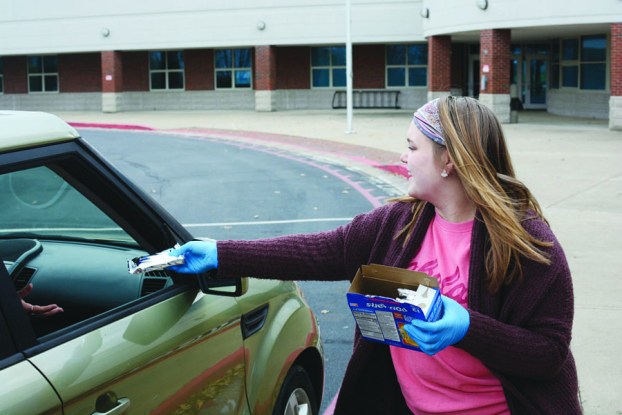 Clark County’s public school students are on spring break this week, but they’re still getting their school lunches and breakfasts.

An army of volunteers has been deployed to do what cafeteria workers and bus drivers had been doing — distributing thousands of meals to students at five schools and on two mobile routes.

Thompson’s Catering is preparing the lunches, the Greater Clark Foundation is picking up the check, and members of churches and other volunteers are handing out the food to parents and kids who drive by.

Sarah said she was contacted by people from her church, Calvary Christian, about volunteering.

“I knew within five minutes of getting that text, I wanted to respond,” she said. “It’s tough and a challenge right now, and we just wanted to help out however we could.”

Joseph Miller, executive director of the Rowland Arts Center, located above The Cairn, coordinated the workforce.

“We had such an overwhelming response from volunteers who wanted to be involved … that within 15 minutes of putting out a call, I was actually putting people on standby,” he said, because they had all the sites covered.

Miller said because the school district had already established the model, organizers were able to put together the effort in about 72 hours.

The Winchester-Clark County Association of Churches helped provide volunteers and purchase breakfast food, the Greater Clark Foundation coordinated the lunch preparation with Thompson’s, and the RAC worked on the organizing the volunteers.

“With Mike Thompson coming through and being able to provide the meals and the Greater Clark Foundation as the funding agent, the community has really come together. It’s a beautiful thing to see,” Miller said.

It’s been a long three and a half years to convert the former Trapp Elementary School into a transitional home... read more