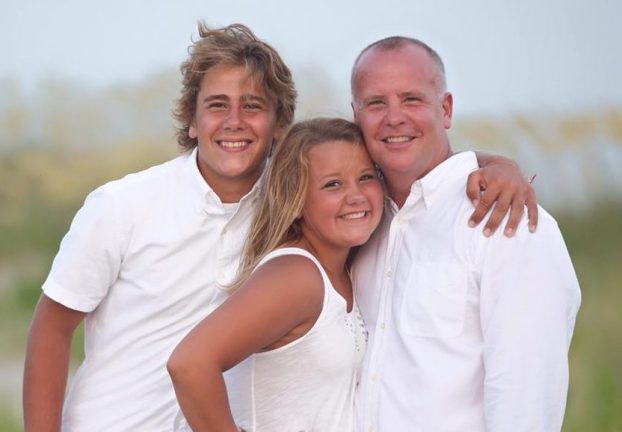 James Nisbet and his son, Pearce, 20, and daughter, Elizabeth Ann, 17, at Bald Head Island in 2015. James Nisbet was the first person in Clark County to be confirmed having the coronavirus. (Photo submitted)

James Nisbet marked his half-century milestone at home, not alone, but separated by a glass windowpane from those he loves — his children.

While he was quarantined inside his home, his son and daughter gave him a surprise birthday party March 19 by dropping off a birthday cake at his doorstep, singing “Happy Birthday,” and talking with him by video on a smartphone.

He could see them and talk with them, but he couldn’t hug them or sit with them.

“I turned 50 in isolation. It was a great day, but it was a really tough day too. Isolation really does take its toll on you,” Nisbet said.

Having the coronavirus also takes its toll, even for those who live through it and whose health isn’t severely affected.

“I’ve been fortunate that I was on the better side of things. But at the same time, I had the coronavirus. Was I scared? Yeah, I was concerned,” he told The Sun in an interview Thursday. “It happened to me, you know?”

Nisbet, a divorced dad who lives alone and who sells medical equipment for hospital operating rooms, contracted the often deadly illness about a month ago while on a ski trip with friends to Vail, Colorado, for an early birthday celebration. They were aware of the virus at the time and were concerned when some started showing telltale signs.

Nisbet began to feel sick when he got home on March 4.

“I had a really traumatic spike in fever” and experienced “a chill,” he said.

He went to a local urgent treatment center and tested negative for strep and flu, so he went home, got some rest and plenty of fluids, took cough medicine and antihistamine and decided to “lay low a bit.”

“The rest of the week, my fever subsided, and I had a little cough,” he said.

As a precaution, he decided not to go to church that Sunday.

“I was supposed to have served communion … and that would have been catastrophic,” he said.

Then his cough got worse.

“It was a deep cough, a cough like I’d never really had before,” he said. It was a dry cough. He couldn’t get anything up, and it made him tired.

It was like somebody punched him in the stomach, and he couldn’t get his breath, he said.

During that time, he said, the other guys from the ski trip were coming down with pneumonia or other respiratory problems, and then he got a call from one of them, who told told Nisbet he had been exposed to someone with the coronavirus and was going to be tested. He had also given them Nisbet’s name and number, so he should expect a call.

That was “Friday the 13th,” Nisbet said. The same day, he went to his own doctor, who at the time had a limited number of test kits, and was tested by providers wearing personal protective equipment. Two days later, the results came back from a lab in Frankfort. He had tested positive.

He was stunned, he said.

“I’ve been in total isolation for over two weeks,” and felt better, he said Thursday, but he had laryngitis during the interview, possibly from talking so much with friends and friends of friends who wanted to know what it was like to have the illness, including some who thought they might have it.

His identify became known when he allowed Lexington TV station WKYT to film his birthday party and then gave an interview that aired on March 31.

Those calls, he said, have been “blessings” because he’s felt so alone.

The outpouring of support, however, has been overwhelming, he said.

“The community was great — my church, my neighbors.” He couldn’t go out, but people brought meals and other things and left them outside his door.

His pastor asked him if he had experienced God’s presence in all of it.

“I said, ‘Jerry, I’ve seen God at my doorstep. God has showed up and delivered,’” he answered.

“That was truly touching,” he said.

Nisbet wants others to do what they can to prevent the spread of the illness to the most vulnerable — the elderly, those with COPD or other respiratory illnesses, those with compromised immune systems.

“I was able to fight it off,” but coronavirus affects some people differently, he said. “I was very fortunate. Other people have to be on a respirator, and they can’t fight it, and ti’s killing people, as we’ve seen, very quickly.”

“We really need to protect our folks,” he said.

The Winchester Sun has partnered with Clark County Child Development Center to bring a daily reading of a children’s book.... read more