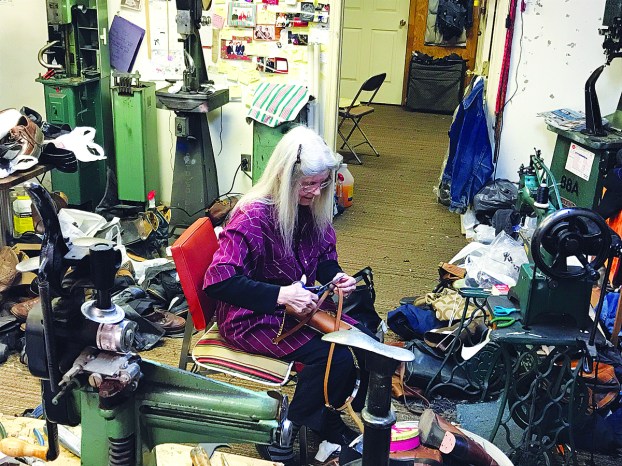 For most of the last 50 years, Janet Watts was a mainstay in downtown Winchester.

Her storefront on North Main Street was a throwback to a long-gone era, where shoes were repaired rather than replaced.

Watts, one of the few remaining cobblers in the region, passed away Sunday in a Lexington hospital at age 75.

Watts, a native of Breathitt County, had been fixing shoes since she and her husband moved to Indianapolis in the early 1960s.

“My husband went to this same shoe repair shop that was on the main drag in Indianapolis,” Watts said in a 2018 interview with The Sun. “He took in a boot of our son’s (to get repaired) and that cobbler charged him 50 cents. My husband fussed about it just to aggravate him.

Her husband made the deal, though neither of them knew anything about repairing shoes. The former owner taught them about the business, and Watts learned it as well.

As they purchased better equipment, Watts said her husband got a job with the supplier and she kept working in the shop.

At one point, they had two locations in Indianapolis, she said, and customers would often leave shoes outside the front door on their way to work. Eventually, they moved back to Winchester, along with the cobbler business.

Through the years, Janet’s Cobbler Shop occupied four different spots in Winchester. Watts kept working, though she admitted she wasn’t making much money from the business in recent years. Watts cited one survey that showed 96 percent of shoes were not repairable. Many of her suppliers had gone out of business.

Though the business and the shoe industry changed tremendously through her career, Watts still loved the work, her customers and the challenge.

“I had a little lady come down to the shop who had a pair of shoes that looked like they needed to be thrown in the trash,” Watts said in 2018. “She said, ‘I want to see this shoe when you get finished with it.’ That’s it, taking something old that looks like it is ready for the trash and making it new. Brand new secondhand is what I say when I’m finished with a shoe. I like working with my hands.”

A full obituary can be found on this page.

Endotracheal intubation saves lives, including those of COVID-19 patients on ventilators. But it also risks the lives of physicians and... read more