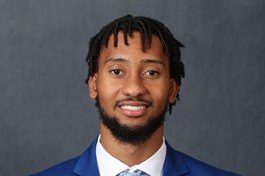 LEXiNGTON, Ky. (KT) — Kentucky lost its starting point guard but added an experienced transfer to its roster next season.

Creighton point guard Davion Mintz verbally committed to play for the Wildcats last week and his transfer became official Wednesday and will be eligible immediately as a graduate transfer.

“I am thrilled, humble and hungry to be part of the UK family,” Mintz said. “I look forward to earning your trust and respect through my commitment, experience and hard work every day. I am immensely thankful to the Kentucky Wildcats, Coach (John) Calipari and his staff for extending me an opportunity to continue my college basketball career as a Wildcat. To my new teammates and fans, you can believe and trust in me. I look forward to meeting all of you. I can’t wait to arrive to Big Lex and get to work.”

Calipari welcomed the addition of Mintz, who redshirted last year because of a high ankle sprain suffered in the presesaon.

He averaged 9.7 points and three assists and three rebounds per game as a junior and dished out more than 100 assists during his sophomore and junior years and made 43 3-pointers as a junior.

“I’m really excited about Davion and what he adds to our team,” Calipari said. “You’re talking about a veteran who has been through the wars and has been well-coached from high school through his time at Creighton. Davion wanted this opportunity and challenge. He’s in the mold of so many of our other guys in that he’s a terrific kid from a terrific family.”

Mintz is the third graduate transfer to join the Wildcats over the past three seasons. Reid Travis played for Kentucky during the 2018-19 season and Nate Sestina competed for the Wildcats this past season.

Kentucky will lose 94 percent of its scoring and 84.4 of its rebounding from last season.

Richards falls short of goal at UK, sets his sights on the next level

By Keith Taylor, Kentucky Today LEXINGTON — Nick Richards wanted nothing more than to compete for a national championship. Although... read more