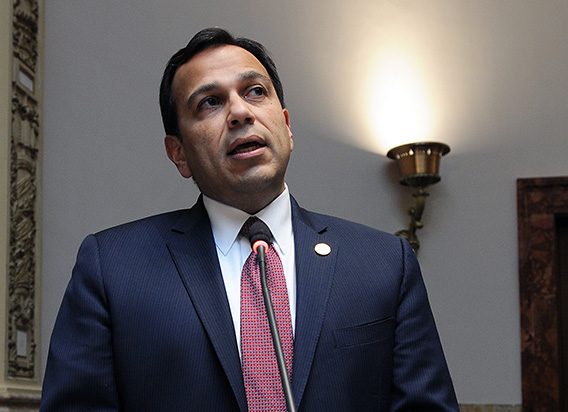 Sen. Ralph Alvarado, R-Winchester, presents Senate Bill 5 for consideration of overiding the Governor’s veto. The bill would require proposed increases of taxes by special purpose governmental entities be submitted to the legislative body of the county or city in which that entity is located.

Supporters of the governor’s vetoes to HB 352 cited the need to give the governor more flexibility to address budget uncertainties in the face of a viral pandemic that has forced massive unemployment in Kentucky and nationally.

The governor cited a rising number of unemployment claims as one reason he vetoed language that he has said could limit the ability of state agencies to address the crisis.

Other language in HB 352 that was vetoed by the governor but reinstated by the General Assembly will give Kentucky’s Attorney General the final word regarding any questions that arise regarding interpretation of HB 352 or the Transportation Cabinet budget.

Under current law, the Finance and Administration Cabinet has the authority to decide questions regarding the meaning of the executive branch budget and Transportation Cabinet budget when the General Assembly is not in session.

In response to questions, Rep. Steven Rudy, Chair of the House Appropriations and Revenue Committee, said language in the budget does not restrict the governor’s ability to deal with the current state of emergency.

“I don’t know of any specific areas where we are giving him limits on how he can deal with the coronavirus,” Rudy, R-Paducah, said. He said the executive branch has access to a year’s worth of restricted funds appropriated by the General Assembly.

“I don’t see there is any possible way they would run out before January” when the General Assembly reconvenes to consider passing a budget for the second year of the 2020-22 biennium. If more funding is needed, Rudy said the General Assembly has the sole constitutional authority to provide it.

“We, the General Assembly, are an important part of our three branches of government. We are the appropriators of the money, and I think it’s important that we’re included in that process,” he added.

House Minority Floor Leader Joni L. Jenkins, D-Shively, said she agrees the General Assembly is an important body, but added, “I gather from your answer to that last question that should the future — which is very hard to predict at this time — indicate that the governor does not have the flexibility to move money, he would then almost be obligated to call us back into special session.”

Rudy said if there was an “extraordinary” need for revenue or appropriations then the governor is the only authority that can call the General Assembly back to act on such legislation.

Veto actions on HB 351 — often referred to as the “revenue bill” — were overridden on a 57 to 32 vote in the House and 24 to 9 in the Senate. Rudy said the governor’s veto actions on HB 351 were “invalid” since line-item vetoes can be made to appropriations bills but not revenue measures. HB 351 is not an appropriations bill per definitions set forth in the state constitution, Rudy said.

“The primary and specific aim of HB 351 was not to appropriate tax dollars, but rather HB 351 is an act of general legislation containing provisions of general law,” he said.

The Senate and House also voted to override vetoes of portions in the two-year state road plan found in HB 354, and the funding for that plan plus other needs included in the state Transportation Cabinet budget found in HB 353 by votes of 59 to 31 and 58 to 32 respectively in the House and 28 to 6 on both bills in the Senate.

All bills with vetoed provisions reinstated by the General Assembly will be filed with the Secretary of State instead of being returned to the governor.

As the coronavirus pandemic continues to evolve, so does the response from local agencies, including the non-profits designed to help... read more