Most Clark virus patients have recovered

Clark County has seen no new cases of the coronavirus in week, and 16 of the 18 local people who have tested positive with the disease so far have recovered. 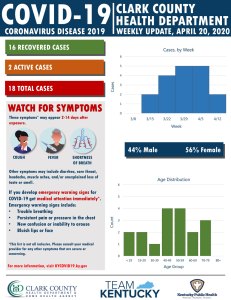 However, after a week of no new announcements, Kissick said she thinks it’s because Clark Countians are doing a good job at “flattening the curve.”

“I think it’s a testament to the fact that Clark County is taking that commitment to Healthy at Home seriously,” she said.

“Our county has taken this very seriously, and we hope that we will continue to see those positive results.”

According to the Clark County Health Department’s information graphic that is updated every Monday, there have been 18 COVID-19 cases in Clark County, and only two of those remain active. There have been no local deaths reported from the disease.

Eight of the patients, according to the chart, have been between 40 and 59 years of age.

In his daily media briefing Monday afternoon, Gov. Andy Beshear said Kentucky has had 3,050 coronavirus cases, including 102 new cases reported that day, and 1,134 have recovered.

Several Clark County pastors have come together to make a YouTube video to encourage and uplift the community during the... read more