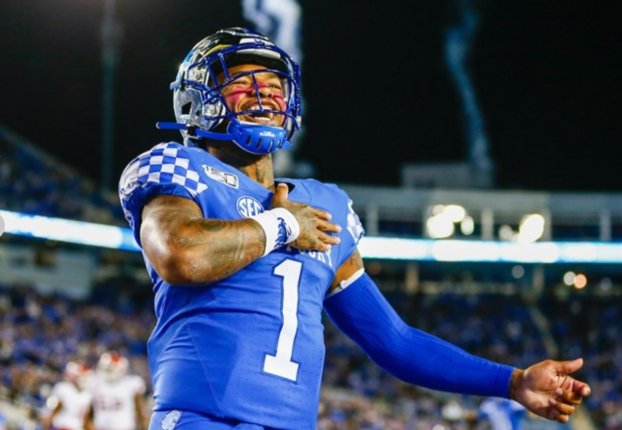 Former Kentucky standout Lynn Bowden Jr. is anxious to prove himself at the next level. (UK Athletics Photo)

LEXINGTON, Ky. (KT) — Lynn Bowden Jr. proved he could be a college quarterback and hopes to get a shot at the next level during the NFL Draft that begins Thursday night.

Although a receiver during his first two seasons at Kentucky, Bowden took over at quarterback after starter Terry Wilson went down with a season-ending knee injury and backup Sawyer Smith was injured the following week at South Carolina. From that point on, Bowden guided the Wildcats (8-5) to a fourth concussive bowl appearance and a 37-30 win over Virginia Tech in the Belk Bowl last December.

During the NFL combine in February, Bowden gained interest from at least 15 teams and most of those teams see him as an all-purpose player.

“A lot of teams see me as playing everything, not just receiver,” Bowden told CBS Sports. “They asked me what position I am comfortable with and I tell them that I don’t have a set position. You can play me all over the field. Whatever position y’all are going to pick me earlier at, mark me down for that.”

Bowden doesn’t have a position preference, but wants to “play everything that I can, any way I can or however I can.”

“I am trying to get on the field and make my debut,” he said. “I told them to put the ball in my hands and they’ll see why Kentucky was in love with me back there [as a punt and kick returner]. I know they want to test mental toughness and everything. I’m ready for all of that.”

When it comes to where he will be drafted, Bowden isn’t concerned. He is projected to go between the second and fourth round.

“I think if you go off my film, it is self-explanatory,” he said.

Bowden hopes his storybook finish as a college player ushers in a new chapter.

“What better way for the story to unfold, especially my story growing up the way that I did and not really having the opportunities and making the best out of the opportunities that presented itself,” Bowden said. “I don’t think my story could have played out any better if I had gone anywhere else.”

Kentucky coach Mark Stoops said he has heard from “quite a few teams and they like our players.” In addition to Bowden, offensive lineman Logan Stenberg expects his name to be called this weekend.

“The good thing is guys like Logan (Stenberg), he did an awful lot,” Stoops said. “He was able to go to the Senior Bowl and that was big for him and the Combine. Lynn, I don’t think it will hurt him at all. I have heard from quite a few teams and the one common theme is that the film doesn’t lie.

The NFL Draft will be held remotely and Roger Goodell will conduct the draft from the basement of his home.