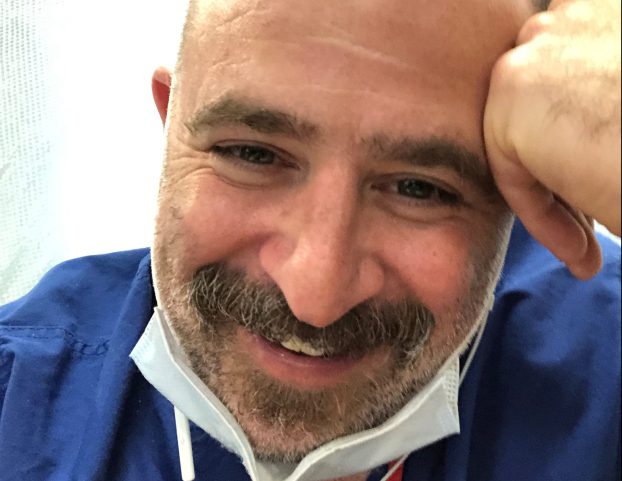 William Davis, a physician assistant from Birmingham, Alabama, who grew up in Clark County, has been working at a coronavirus field hospital in the New York borough of Queens. (Photo submitted)

William Davis, a physician assistant, was on his feet all day and into the night Wednesday at the Billie Jean King National Tennis Center in New York City, which has been converted into a 350-bed field hospital for COVID-19 patients.

“There is no routine day,” Davis said Thursday. “Yesterday, I spent 12 hours on the floor … managing patients” and the next day he was helping medical staff get their personal protective equipment on and off and running errands.

A physician assistant residing in Birmingham, Alabama, but whose hometown is Winchester, Davis had been on furlough when he decided to offer his services where he was needed, in the thick of the fight against the potentially deadly coronavirus.

The 40-year-old son of Garnett Davis and Dr. William Davis of Clark Regional Medical Center in Winchester, is a graduate of George Rogers Clark High School, the University of Kentucky and the University of Alabama at Birmingham, where he earned his degree to become a physician assistant and worked in the hospital emergency room. He has a 13-year-old daughter, Ellen.

He had never visited New York City until a few weeks ago.

Eight million people live in America’s largest city, more than twice as many as in Kentucky. Last week, one model projected Kentucky would reach its peak of 466 COVID-19 deaths by Aug. 4. Last Monday, New York Gov. Andrew Cuomo announced his state’s death rate from the virus for that day was 478. It was the first time it had dropped below 500 a day since April 2.

Until recently, as many as 700 to 800 people a day were dying of the illness despite the efforts of some of the best medical professionals in the country, including people who have come from every part of the U.S. to be involved in saving lives.

Davis hasn’t seen many deaths because the patients in critical condition — those on ventilators — go to the city’s permanent hospitals, not the temporary field hospitals like the one where he’s working.

“We’re kind of taking the overflow right now,” he said. “It helps keep the strain off the big hospitals. … We can manage a few of those, but we’re limited in our capacity.”

Davis has been inspired by the people he works alongside and by New Yorkers.

“People here have been so kind,” he said.

Davis said he was moved to tears Wednesday night by a group of Boy Scouts who made dinner for him and his colleagues to show their gratitude.

Davis said most of those who have come to Queens from other places got into medical work because they wanted to help people.

“Speaking for myself, this is just the way I’m wired. It’s the path I’ve walked,” he said.

Davis said the battle against the coronavirus in New York is “not at all what I expected.”

He used to think the threat of the virus was exaggerated, but he sees the situation differently than when he was in Birmingham, a city about the size of Louisville.

For someone in Winchester, it might look different still, he said.

“Those people who are protesting at the statehouse in Frankfort, they’re not seeing what’s going on up here,” he said. Maybe if they could see, he said, they might be less prone to protest.

On the other hand, bringing the economy to a halt isn’t sustainable in the long term, and there can’t be a “one size fits all” plan for every city or state as to how soon they reopen, he said.

If we could all try to see the situation from others’ perspectives, “perhaps we wouldn’t be so virulent” in our opinions, he said.

Davis said the strength and love of those he has met give him strength in the midst of a global health crisis.

“What gives me hope? I woke up today. It’s a beautiful day, and I want to make the most of it.”

Last day for students to be May 5; School board approves virtual GRC graduation proposal

The Clark County Board of Education approved unanimously to end the 2019-20 academic year May 5. Although May 5 will... read more