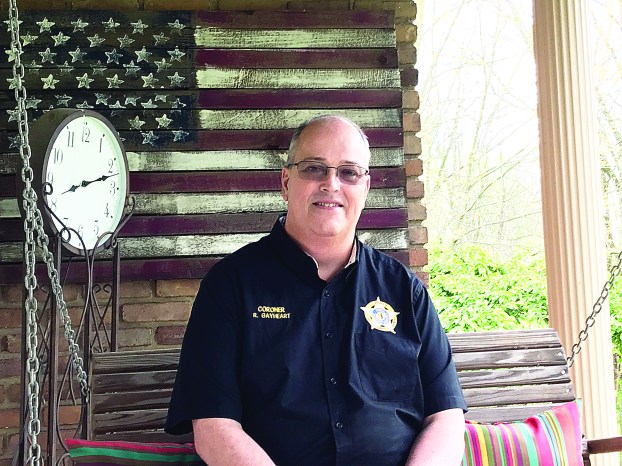 Clark coroner says battling cancer has given him new perspective

It’s a sunny spring afternoon on Cardinal Lane, and Robert Gayheart is sitting on his front porch swing, looking over his yard and enjoying being outside.

Ten months ago, everything was proceeding as normal. He had his jobs working at an eye bank in Lexington and as Clark County’s coroner.

“I collapsed with a cardiac event that was brought on by the tumor I didn’t know I had,” Gayheart said.

Within six days, he was diagnosed with stage 3 rectal cancer, and it was not contained.

“When cancer gets attached to your name, it’s a different feeling,” he said. “Cancer is a word that brings fear. It affects all members of the family.”

Aggressive chemotherapy and radiation started July 3, 2019, with only his weekends off from treatment.

“It’s a full year of treatment and it takes time to recover,” he said. “I had to allow my internals to heal so when they did surgery” it would go better.

Surgery was scheduled for October, but September brought more heartache. His mother passed away Sept. 3. The following day, Gayheart was told he had lost his job of 24 years, along with his family’s health insurance.

“I really had to start trusting God in everything,” he said. “I’ve tried to let my faith be seen in this community.”

Surgery came on Oct. 22 in Lexington. What was scheduled for a couple of hours turned into seven and a half hours after doctors found the tumor was much larger than they thought.

A second surgery followed in November, where doctors attached a radioactive mesh to his pelvic wall to help stop the cancer.

After seven days in the hospital, Gayheart came home, but he had to return after a day and a half for an infection.

He returned home in December, after spending part of his stay in a rehabilitation hospital learning to use his legs again, he said.

In January, his brother passed away.

Four months later, Gayheart said he sees his cancer and treatment as a blessing, and it has affected his perspective on life, especially in light of the coronavirus pandemic.

“It’s given me more time with my family,” he said. “We’ve watched more movies (together) than I can count.

“It’s shown me what’s truly important. Life is short. It’s precious, but you can’t ever give up.”

Staying home, he said, is no problem.

“Being quarantined doesn’t bother me,” he said. “I was quarantined 48 days in a hospital. COVID has given us more time together.”

With only a handful of treatments left, Gayheart said his prognosis is good.

“It shows I’m currently free of cancer,” he said. “The chemo I’m doing is to keep it from coming back.”

“It’s slowed down a lot,” he said. “I don’t know what the next phase looks like. I just know things I used to focus on really don’t matter.

“I’ve had friends I didn’t realize how close they were, and others who weren’t as close as you thought.”

BALDWIN: Some sword and sandal cinema to try

Greetings my fellow cinephile warriors of Winchester! We live in strange times. I suppose the world has always been weird,... read more